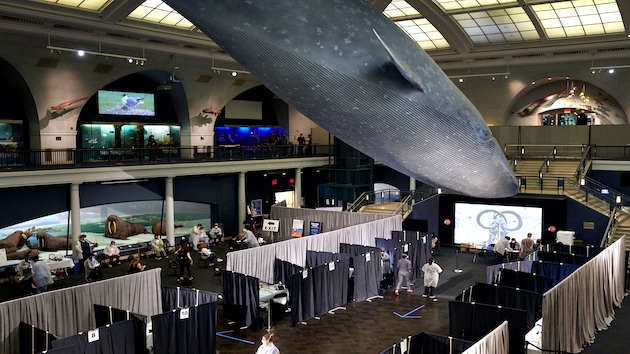 (NEW YORK) — Seventy one fans got vaccinated during the Milwaukee Bucks vs. Brooklyn Nets basketball game Sunday, marking the latest effort by health departments to make COVID-19 vaccines convenient and even fun.

The department’s focus, Tau explained, is “to proactively bring the vaccine to where people already are in the community, removing any barriers and making it as convenient as possible.”

Converted spaces, like empty stadiums, airplane hangars and deserted malls have served as vaccination hubs during the United States vaccine rollout. Some new sites also offer incentives for Americans to get vaccinated, such as free museum passes or being able to get vaccinated at a sporting event or on the way to work.

Here are a few of the new options that have cropped up in recent weeks:

Basketball fans aren’t the only spectators with the chance to cheer for the home team following their shot.

During Seattle Sounders home games this season, all eligible fans will have an opportunity to get vaccinated for COVID-19, no appointment necessary. Shots are available when the gates open and run through the end of the soccer match, according to the Sounders Football Club. One-shot Johnson & Johnson vaccines and the first dose of the Moderna series will be offered. Fans can get their second Moderna shot at any Seattle community vaccination hub.

As an added perk, those who got vaccinated during the Sounders’ May 3 match received a voucher for a free hot dog.

New York City residents 18 and older can now take in a storied cultural institution and get their COVID-19 shot in the same afternoon. The American Museum of Natural History’s walk-in vaccination site opened on April 23 in the museum’s Milstein Hall of Ocean Life, meaning vaccinations take place underneath the museum’s massive blue whale, which currently sports its own oversized Band-Aid.

Those who get vaccinated at the museum earn a voucher for complimentary admission for four people on a future visit. (General admission for New York residents is technically pay what you wish, except for special exhibits, according to the museum’s website.)

Thanks to a partnership between the Los Angeles Department of Public Health and Metrolink, the city’s commuter rail, the Palmdale and Lancaster stations are now also home to mobile vaccination units, which will be distributing 250 shots each per day.

As of April 20, vaccinations are available between 10 a.m. and 7 p.m. Tuesday through Saturday, by walk-up or by appointment. Anyone 16 or older who lives or works in LA County is eligible to get a shot.

Alaska Gov. Mike Dunleavy made waves last month when he announced that tourists to Alaska this summer will be able to get vaccinated at the state’s major airports starting on June 1.

The offer is meant to kickstart Alaska’s beleaguered tourism industry, which suffered when cruises, which the state relies for tourism dollars and jobs, were shut down during the pandemic.

“You come to Alaska and you get a shot,” Dunleavy said during an April press conference. “The idea is that if we have excess vaccines, why not use them?”