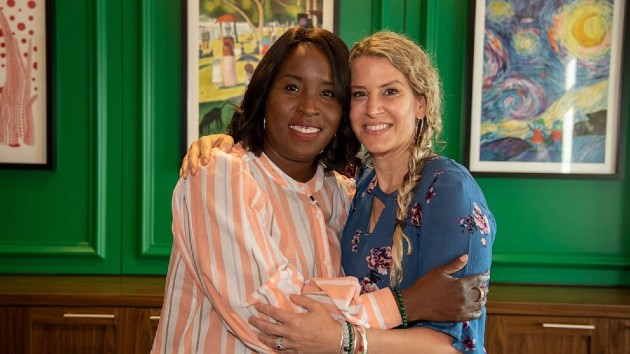 (ATLANTA) — A chance encounter in a bathroom at work turned into a lifesaving kidney transplant chain for two coworkers at an Atlanta hospital.

Susan Ellis and Tia Wimbush, who have worked together at Children’s Healthcare of Atlanta for more than a decade, both knew each other’s husbands needed a kidney transplant, but it was not until they saw each other in the bathroom at work last fall and stopped to ask how their husbands were doing that they made a lifesaving connection.

“My thought immediately was that we could help each other and stop the suffering of two families,” Wimbush, 45, told ABC News’ Good Morning America. “I called Rodney immediately and he and I were both just committed to moving forward and trying to help two families.”

Rodney Wimbush, also 45, a high school teacher, was diagnosed with kidney failure in August 2019, a sudden diagnosis that came after he had to be taken by ambulance to a hospital due to high blood pressure.

A father of two sons, he started dialysis immediately after his diagnosis. He was put on the kidney transplant waiting list in the spring of 2020, just as COVID-19 hit the United States, slowing down the process.

Ellis’ husband, Lance Ellis, received a kidney transplant from his mother several years ago but went into acute renal failure in August 2019 when his body rejected the kidney.

He was also put on dialysis immediately after diagnosis, treatments that would stretch for as long as five or six hours daily.

“It hampers your quality of life,” said Lance Ellis, who is a stepfather to his wife’s two daughters. “There’s nothing easy about it. When I would get unhooked from that machine, I would feel worse.”

After making the discovery that they could possibly save the lives of each other’s husbands, Susan Ellis and Tia Wimbush underwent the required testing and were approved last October as kidney donors for Lance and Rodney.

“It was a burden being lifted knowing that they were both going to get back to a better quality of life,” said Tia Wimbush.

The couples then saw their hopes for the lifesaving transplants put on hold.

The transplants were scheduled for December but were postponed when Lance Ellis was hospitalized with complications from his acute kidney failure.

The two couples were then scheduled to undergo the transplants in January, but the day before surgery, Susan Ellis tested positive for COVID-19.

“It was devastating,” she said. “Lance was already in the hospital being prepped. I had to quarantine in a hotel room for 10 days.”

The couples then had to move their transplants to the next date available, March 19.

“When you see the finish line, it makes even sweeter,” said Susan Ellis, who happened to arrive at the hospital at the same time as the Wimbushes on transplant day. “At 5:30 a.m., we walked through the hospital doors together.”

After two successful transplants that stretched over the course of one day, the two couples recovered on the same hospital floor as each other, with rooms next to each other and just down the hall.

“It was not as easy as I thought it was going to be, but I’d absolutely do it again,” said Tia Wimbush. “The feeling that I had after surgery is one that I almost can’t describe, just the hope and joy that I felt knowing that my kidney could be a part of the process that helped two people have a better quality of life, after seeing what they’ve gone through in their kidney disease journey.”

“As soon as I could get out of bed, Susan took me on a walk and we walked up and down the halls, and it was like out of a fairytale for me,” said Lance Ellis. “After being sick for so long, you forget what feeling good feels like. After waking up from that surgery, you feel capable of anything. It’s life-changing.”

“All that time that was sacrificed for dialysis, I can devote to my family,” he said.

Rodney Wimbush says he considers the Ellises to be “family now,” saying, “I worry more about Lance than I do myself. I’ll always be grateful to Susan for doing what she did.”

Tia Wimbush and Susan Ellis call each other “kidney sisters” and described themselves as having a bond for the rest of their lives. They both returned to work post-transplant last month with a surprise welcome that saw their coworkers lining a walkway to cheer for them.

“In the process, having somebody else to talk to about this, to talk on a real, transparent level about how we’re feeling as wives, as women, as mothers, has been invaluable,” said Tia Wimbush. “We’re looking forward to just continuing to get to bond with them because we’re family now.”

Both couples say they want to use their story to encourage people to look into becoming a living organ donor. There are currently more than 107,000 people in need of an organ transplant in the United States, according to federal data.

They also hope their story is a reminder to people to stop and check in with each other, from coworkers to strangers to family members.

“Our story is a story of kindness. It ended up in a kidney exchange, that was the result of it, but it started with human beings just human beings and checking on each other,” said Susan Ellis. “We’re so busy with social media and texting and thinking ‘that’s not my business’ that we can self-isolate and we don’t check in on our neighbors.”

“This is the most important and rewarding thing I’ve ever done in my life,” she said of the kidney donation. “I didn’t do it for that, but it ended up being that way.”