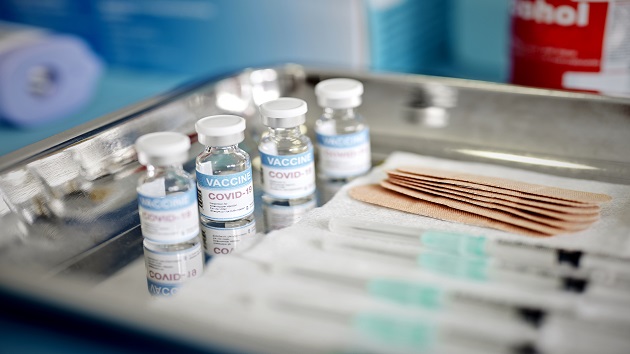 (NEW YORK) — Despite a recent increase in COVID-19 breakthrough infections, an updated report illustrates the significant impact the nation’s vaccine campaign has had in preventing millions of virus-related deaths, hospitalizations and infections.

The U.S. COVID-19 vaccine program is now estimated to have prevented 2.2 million deaths, 17 million hospitalizations and 66.1 million additional infections through March 2022, according to updated modeling from the Commonwealth Fund, an organization advocating for improved healthcare for marginalized communities.

In the analysis of recent trends, researchers estimated that the daily peak of deaths pre-omicron, and without vaccination, would have exceeded 24,000 per day, far surpassing the actual peak of 4,300 per day, experienced by the country during the winter of 2021.

Without the vaccines, the omicron wave could have been substantially larger, the study suggested.

In addition, the researchers estimate that without vaccines, there would have been nearly $900 billion in associated health care costs.

The model accounts for waning immunity and changes in population behavior over time, as schools and businesses have reopened and travel has increased. As immunity wanes, researchers stressed that “redoubling efforts to increase vaccine uptake, especially among the elderly and other vulnerable groups, will be critical to avert outbreaks as pandemic restrictions are lifted,” particularly as the omicron subvariant, BA.2, spreads.

“Our findings point to the tremendous power of vaccination to reduce disease burden from COVID-19. This may be even more important if newer variants arise or population immunity ebbs. Without continued funding, the lifesaving impact of vaccinations are at risk,” researchers said.

Former President Donald Trump and President Joe Biden have both taken credit for the development and implementation of the COVID-19 vaccine.

Following the release of the study, the White House said in a statement that the loss prevented by the vaccine is the “the result of the Biden Administration’s efforts to use every tool to make vaccinations easy and convenient for every American, Congress providing us the vital resources we needed, and the American people stepping up and doing their part.”

“Together, we’ve spared millions of families the immeasurable loss that too many others have suffered, and turned unthinkable pain into extraordinary purpose and progress,” the statement said.

Trump has also touted his administration’s leadership in the nation’s vaccine rollout, asserting that the vaccines would not have been developed at such a fast pace without his pressure on drug companies.

“There are some people that say my greatest achievement was getting the vaccine, because the vaccine was said to take three to five years, and most people said it wasn’t going to happen,” Trump said during a panel interview at Princeton University in July 2021. “We made maybe one of the best bets in history because we bought billions and billions of dollars worth of the vaccine by saving time long prior to knowing whether or not it was going to work.”

“The irony of course, is that the Trump administration was responsible for fighting for this pandemic funding, in fast-tracking the vaccine process that has really saved a lot of lives,” Peter Jacobson, professor emeritus of health law and policy at the University of Michigan School of Public Health, told ABC News.

In order to protect more Americans moving forward, the Biden administration and its top health officials, including Dr. Anthony Fauci, chief medical adviser to the White House, and Dr. Rochelle Walensky, director of the Centers for Disease Control and Prevention, have continued to push for COVID-19 funding.

“COVID-19 is not over. And we have an obligation to protect our country, the American people and make sure we’re taking steps to prepare,” White House press secretary Jen Psaki said during a press conference this week.

The White House asserted inaction on funding for Covid-19 relief will leave the nation vulnerable to the emergence of future surges and variants. Weekly allocations of many COVID therapies have already been scaled down with the funding stalled in Congress.

“This is deeply disappointing – and it should be unacceptable to every American. We’ve worked too hard and come too far to leave ourselves and our economy vulnerable to an unpredictable virus,” the White House statement said.