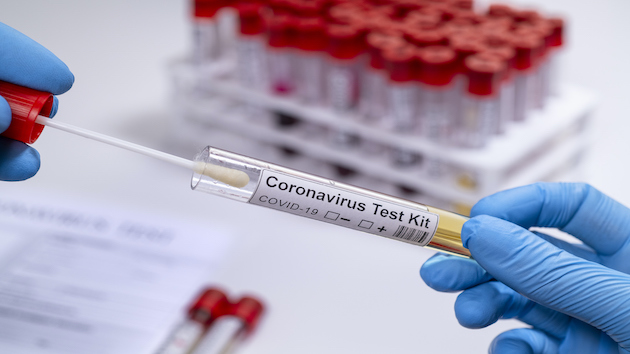 (NEW YORK) — With the arrival of spring and after an exhausting year of COVID-19 restrictions, Americans are eager to return to some sense of normalcy.

However, many health experts are urging patience, warning a possible fourth surge may be on the horizon, with over a dozen states exhibiting early signs of increasing case numbers.

Dr. Anthony Fauci, the nation’s top infectious disease expert, raised the alarm this week, expressing his concern that we may be reopening faster than we should.

“There were times when we thought things were getting under control and then it exploded again,” Fauci said. “So although we are going in the right direction, we’ve got to keep our foot on the pedal with regard to public health measures.”

Over the last week, more than a dozen states have seen increases in their daily case averages. Parts of the upper Midwest have been exhibiting particularly concerning trends, including in Michigan, where cases have been on the rise since late February.

Experts and officials fear that a combination of loosening restrictions and spread of the U.K. variant might be causing the rise in Michigan — a potentially troubling sign for other areas as mass vaccination rolls out.

The Great Lake State currently has the country’s fourth-highest average of new COVID-19 cases per capita, with New Jersey leading the country. For the past three weeks, the daily case average has doubled. In the last week alone, the state’s average has increased by 53%.

The seven-day average is now over 2,500 new cases a day, according to data from the Centers for Disease Control and Prevention, and on Wednesday, Michigan reported a total of 3,164 new cases, its highest single-day case total since early January.

In comparison, California, with approximately four times the population of Michigan, has recorded only 415 more cases than Michigan this week.

“Despite several months of declining trends, we are still at high levels of community transmission and with [the U.K.] variant that is known to be more transmissible, there is a real concern that you could rapidly get into a situation of exponential growth in cases that threatens to overwhelm healthcare systems again,” explained Josh Petrie, a research assistant professor in the Department of Epidemiology at the University of Michigan’s School of Public Health.

Michigan has experienced a steady increase in hospitalizations over since late February and 1,000 people are currently hospitalized, Dr. Sarah Lyon-Callo, director of the MDHHS Bureau of Epidemiology and Population Health, said during a press conference Wednesday — a 45% increase since Feb. 25.

By contrast, the seven-day average of hospitalizations is down 8.4% nationally this week, and 73% from the peak in January, according to CDC data.

In the last week, hospital admissions in Michigan have increased by 24%, according to the CDC, and the PolicyLab at Children’s Hospital of Philadelphia reports that emergency department visits and hospitalizations are increasing in Michigan.

Wayne and Genesee counties (home to Detroit and Flint) and Macomb County have viral reproduction numbers over 1.3, indicating “substantial transmission,” and the organization’s models project a potential doubling in case incidence in these counties during the next 3-4 weeks.

Although there continues to be a decline in the number of deaths in the state, Lyon-Callo warned that deaths are a lagging indicator. Therefore, that the numbers of COVID-related fatalities could rise in the next few weeks.

The rising metrics may be related to the emergence of a more contagious coronavirus strain, Callo-Lyon said.

According to the CDC, Michigan currently ranks second in the nation for the most reported cases of the B.1.1.7 variant first discovered in the U.K., with over 725 confirmed cases in 31 counties.

“This variant is very communicable,” Dr. Nigel Paneth, professor of epidemiology and biostatistics and pediatrics at Michigan State University, told ABC News. “It may be a bit more likely to cause severe disease, but does appear to be preventable by the current vaccines.”

The variant is found in the more densely populated areas of the state, with more than half the B.1.1.7 variants identified stemming from an outbreak within the Michigan Department of Corrections, according to the state health department.

In addition to the B.1.1.7 variant driving increased transmission, there is a confluence of factors which may be driving the rising metrics, Dr. Tara Smith, Professor of Epidemiology at the Kent State University College of Public Health, told ABC News, beginning with loosening restrictions on eating, entertainment venues, and other businesses, by Gov. Gretchen Whitmer’s administration in the past few weeks.

“I believe we are also seeing COVID fatigue, along with, in our state, some modest relaxation of the public health guidelines,” said Paneth. “There is clearly an unfortunate trend now for the general public to relax distancing measures and for authorities to relax public health restrictions. This is a real concern in light of the continued evolution of new strains of the COVID virus.”

Further, with more children back in school, and participating in sports programs, school-related COVID-19 cases are increasing in the state, according to state data.

“The largest number of outbreaks are in K-12 school settings at 162, with 54 new outbreaks reported this week,” said Callo-Lyon. Children ages 10-19 now have the highest COVID-19 case rate in Michigan, a rate that “is increasing faster than that of other age groups.”

Nationally, however, new child cases declined for the eighth consecutive week, according to a weekly report from the American Academy of Pediatrics and the Children’s Hospital Association.

However, she said, these new cases are associated with extracurriculars such as sports, and not being in a classroom. As a result, Michigan will begin mandating testing among high school student-athletes.

“The classroom environment itself has not been a strong signal for outbreaks. It tends to be more those the activities associated with schools, and including sports but not limited to sports,” Callo-Lyon added.

The outbreaks come as the state prepares to open its largest mass vaccination site at Ford Field in Detroit, which is set to officially open on March 24.

“It is time for us to grit our teeth and keep doing the work we need to do until the last second of this event plays out. If we want to get back to normal…we all need to get vaccinated, encourage our loved ones and friends and co-workers and neighbors to do so,” Whitmer said on Thursday.

The state is vaccinating at a rate of 90,000 people a day, according to state officials, but so far, less than 25% of the state population has received at least the first dose of the vaccines.

The percentage is lower for cities like Detroit, falling to 15.1%. Earlier this month, the city of Detroit faced criticism for choosing to forgo an allocation of the Johnson & Johnson vaccine.

Detroit Mayor Mike Duggan had said that intention, “for as long as possible” was to “stick with the Moderna and Pfizer vaccines,” as they were “the best.” However, the mayor’s office later retracted his comments, and said the city is “excited” to have three highly effective vaccines to offer its residents.

Experts agree that the key to avoid a possible resurgence will be to not only vaccinate as many Americans as quickly possible, but also to continue to follow proper mitigation efforts.

“Getting as many people vaccinated as quickly as possible will be helpful for reducing the impact of a resurgence. However, my worry is that it takes about a month and a half to get both doses and develop full immunity. Transmission happens much faster than that,” said Petrie. “So continuing to mask, social distance, and avoid unnecessary community contact will be important until we can get a much larger proportion of the population fully vaccinated.”

“We all need to still be careful and realize we’re not yet out of the woods,” concluded Smith.