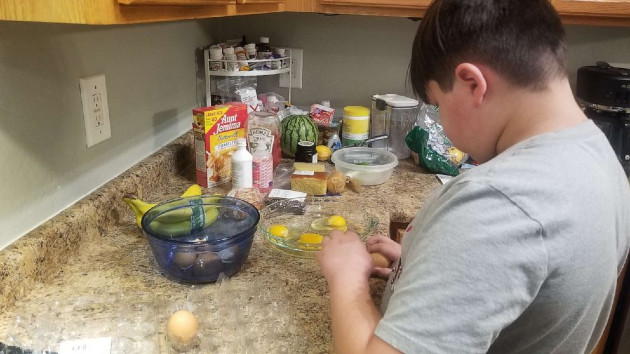 (NEW YORK) — Jojo Branch-Rodriguez, a 12-year-old boy who is on the autistic spectrum, was never a fan of fruits and vegetables. He struggled to eat foods like broccoli and avocado.

That was then. Now, Sensory Cooking, a Phoenix-based nonprofit that works with people on the spectrum to combat sensory overload through cooking, has helped Jojo make tremendous progress with food aversion.

Katie Murwin, founder and director of Sensory Cooking, uses a sensory-therapy approach in which she immerses her students in multisensory cooking classes — fusing taste, smell and sound — in hopes of providing strategies to improve motor and oral skills while expanding their food palate.

A 2017 study from AutismSpeaks revealed that children with autism are five times more likely to have mealtime challenges. Children with autism spectrum disorder often grapple with sensory processing issues — a disorder of the brain that affects developing children and adults. Some of the triggering factors tend to be the taste, temperature, color, smell and texture of everyday foods — which they often avoid.

“Certain foods can lead to pain or upset stomachs and different GI issues. And so a lot of children with autism will avoid certain foods because of that,” Varleisha D. Gibbs, an occupational therapist and vice president of practice engagement and capacity building at AOTA, Inc., told ABC News.

Murwin was inspired by her son Nicholas, who is also on the autism spectrum, after watching him struggle in the kitchen. Murwin currently teaches 12 people, ranging in age from 5 to 35 years old. This full-fledged experience is offered over Zoom, and before COVID-19 it was conducted in-person typically with an aide or occupational therapist present.

Murwin partnered with Give Garden, a Phoenix-based business that sends boxes of food to children across the area for their Zoom cooking sessions.

Give Garden executive director Stephanie Lucas, who is also a registered dietician, told ABC News’ Will Carr, “It really feels like a gift. There’s tissue paper, they open up the gifts and all the food is inside, along with a culinary adventure card and the card itself talks initially about some nutrition ed. It’s really designed to talk about not good foods versus bad foods. But why would we eat this food? What does it do for us?”

The stigma associated with children with autism spectrum disorder continues to be that they are “picky eaters.”

“If it’s the auditory piece, it could be causing pain. Tactile defensiveness could actually be sending a message to your brain that there is a threat, if you will, and that automatically will see you into fight,” she said.

While it’s challenging to offer the exact reason why food aversions are more prevalent in people living with autism, some researchers do believe there is a link to some of the current research with microbiomes, which is your brain-gut connection and the ecosystem of bacteria that lives within all people.

“Children and individuals in general that have autism tend to have somewhat of an imbalance with those bacteria in the gut,” Gibbs said.

Rodriguez said she has seen improvements in Jojo’s confidence and she loves to witness her son’s newfound appreciation of healthy foods.

“He’s more confident and that has been amazing to see it. It really warms my heart. … He will talk to people that we meet on the street and he’ll be like, ‘Oh, I love to cook. Oh, my favorite food is, you know, beef and broccoli. It’s cannolis, it’s egg fried rice.’ And there’s so many things that cooking is a part of; it’s a foundation and it’s just opened so many doors,” she said.