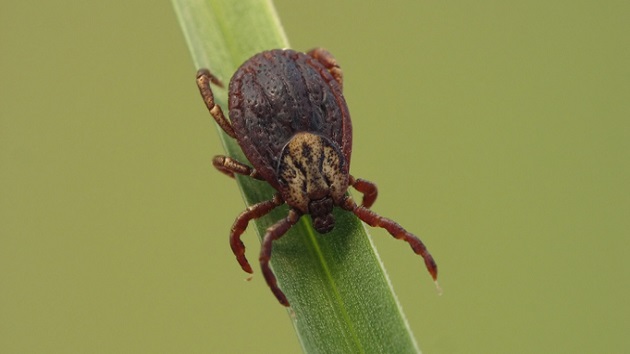 This is the first fatality recorded in the state and the second in the U.S. this year after a Maine resident died from POWV in April.

According to the DPH, the patient was bitten by a tick and the insect was removed two weeks prior to the onset of symptoms.

The woman, who was in her 90s, first exhibited symptoms in early May including fever, chills, headache, altered mental state, chest pain and nausea, the department said.

She was admitted to a local hospital where her health rapidly deteriorated, according to the DPH.

She “became unresponsive over the next two weeks” and passed away May 17.

After the patient’s death, tests performed by a Centers for Disease Control and Prevention laboratory in Fort Collins, Colorado, confirmed she had antibodies to POWV.

POWV is typically spread by black-legged ticks and deer ticks. Most cases in the U.S. occur in the Northeast or Great Lakes regions typically between mid-spring and early fall.

DPH Commissioner Dr. Manisha Juthani wrote in the release that the virus can be transmitted from tick to human in as little as 15 minutes after the bite, but it can take anywhere from one week to one month before symptoms emerge.

Most patients experience either no symptoms or mild flu-like symptoms, the press release said. But, in severe cases, POWV can cause encephalitis, which is inflammation of brain tissue, or meningitis, which is swelling of the membranes around the brain and spinal cord.

There are currently no specific treatments for POWV — aside from helping relieve symptoms — and no vaccines to prevent the disease.

“This incident reminds us that residents need to take actions to prevent tick bites now through the late fall,” Juthani said in a statement. “DPH stresses the use of insect repellent this summer and avoiding high-risk areas, such as tall grass, where ticks may be found.

She added, “It’s also important to check carefully for ticks after being outside which can reduce the chance of you and your family members being infected with this dangerous virus.”

The CDC recommends showering within two hours of having been outdoors to reduce the risk of tickborne disease and to either wash clothes in hot water or tumble dry low to kill any ticks that may have been carried indoors.

This is the second case of POWV reported in Connecticut this year after a man in his 50s fell ill with the disease in late March.

He was hospitalized with central nervous system problems, but was eventually discharged and recovered at home, health officials said.