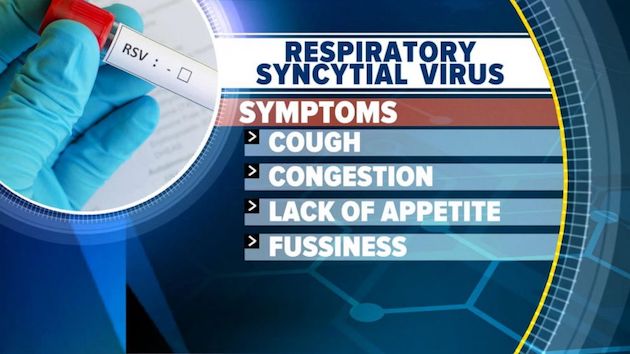 (NEW YORK) — After more than a year, children are emerging from the COVID-19 quarantine.

Family gatherings are back, and so are germs and other viruses. For young children, getting sick is a rite of passage that’s often short-lived and helps build up future immunities.

What is uncommon now is the time of year viruses common in children are finding a foothold.

In some parts of the country, hospitals have been reporting an unseasonable rise in viral infections, according to the U.S. Centers for Disease Control and Prevention.

For children younger than age 2, the most frequent is a lung infection causing temporary inflammation in the airways, called bronchiolitis, which is most often caused by respiratory syncytial virus, or RSV.

Cases among kids typically crop up in the fall and winter, when school is back in session and germs are easily shared, but experts said they’re seeing these cases now.

“The number of RSV cases is about the same,” Dr. Allison Bartlett, pediatric infectious disease doctor at the University of Chicago, told ABC News. “It’s the season that’s unusual.”

This period of time in summer is now being called “RSV season” because more than 1 out of 10 tests are positive for the virus, according to Bartlett.

Here’s what parents should know:

How to prevent RSV

For the general population, experts said kids can keep safe from RSV with the same health measures we’ve all been doing for more than a year during the COVID-19 pandemic: Masking, social distancing and following good hygiene.

Teaching kids to practice “respiratory etiquette” and handwashing can help, along with keeping infants away from others who may have a respiratory infection already, according to Bartlett.

“Managing the COVID pandemic has reinforced for everyone the impact that masking, social distancing, school closure and staying home when you’re sick can have,” she said. “All of the actions we took to stop the spread of COVID effectively prevented RSV as well. Now that we have relaxed some of these strategies, RSV is back.”

Symptoms to watch for

Children with RSV may start to wheeze, develop a cough or congestion or spike a fever, the body’s natural response to fighting off a virus.

Parents may also notice their child has less of an appetite than usual, that they’re more tired and more irritable.

As parents and guardians monitor kids’ symptoms that can span several days, experts caution not to be alarmed if a child seems to worsen, even after starting to see mild improvements.

“Days four to seven of illness is really when the infection declares itself,” said Dr. Alisa McQueen, a pediatric emergency medicine physician at the University of Chicago. “It’s common for many of the symptoms to almost resolve, and then suddenly come back.”

What to do if your child is sick

Most cases of bronchiolitis are very mild and can be managed at home with over-the-counter therapies and a little “TLC.”

Experts point out if a child is sick, but not in crisis, keeping them home, rather than seeking emergency medical care, may actually be safer and healthier for them and others. RSV is an extremely contagious virus that, after spreading by saliva and mucous droplets, can linger on surfaces far longer than many other viruses.

A several hours’ wait in the emergency department could expose a child to other, even more harmful pathogens, especially if their immune system is already weakened.

Many fevers will resolve without medication, but fever-reducing medications like acetaminophen or ibuprofen can help.

If a child is having trouble blowing their nose and needs relief, cool mist humidifiers, manual suctioning devices, or thinning out the mucous with nasal saline drops will help o help drain easily from the nose, according to Dr. Tyree Winters, a New Jersey-based pediatrician.

But for a small number of infants and young children, RSV can be dangerous.

Approximately 1% to 2% of children who get RSV end up hospitalized. The virus accounts for around 58,000 hospitalizations each year for children under the age of 5 in the United States, according to the CDC.

If a child struggles with breathing beyond the point of congestion — episodes where they stop breathing, have faster breathing, use extra muscles to breath or start turning blue around the mouth — that’s a sign to seek medical attention.

The extra energy the body is using to fight the infection can often makes children sleepier and less active, but when a child is too tired to even drink, has stopped making diapers or cries without making any tears, these are all early signs of dehydration and might mean a child is too sick to fight this infection alone.

Gauging what level medical attention a child needs can be tricky, especially for an anxious parent, so when in doubt, seek help, experts say.

“If something doesn’t seem right, come in the emergency department and let us take a look,” said McQueen. “We’re here 24 hours a day for exactly this reason.”

In most cases, if a child is admitted to the hospital, the stay will only last a few days. These children are often placed on supplemental oxygen to make sure they are getting enough.

If a child has not been eating for several days already, the hospital can also help by giving them IV fluids until the child feels well enough to start eating and drinking normally again.

For infants at greater risk of severe illness, like those who were born premature, or those with chronic lung or congenital heart disease, a monthly antibody injection is available.