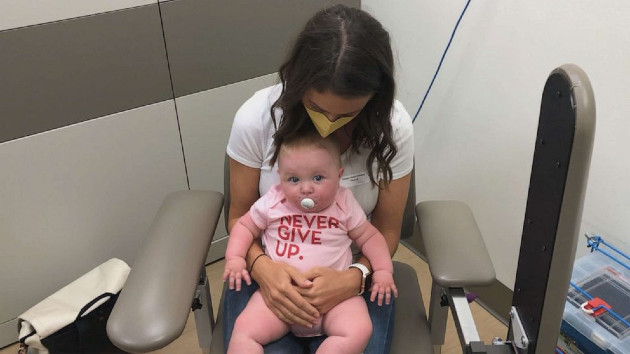 (Credit: ABC News) Rhys Devine with her mother, Ceri Devine, during a visit to the doctor for her spinal muscular atrophy.

(LOS ANGELES) — Ceri and Rory Devine welcomed their first child, Rhys, into the world three months before COVID-19 shut down the country. It wasn’t long before the new parents from Redondo Beach, California, began to see the hampering effects of the lockdown on their ability to address unsettling signs in their daughter’s development.

“There was no comparisons for children because of the pandemic. So we never had the sort of side-by-side or interactions or anything like that, either, so that was really difficult,” Rory Devine told Nightline.

Rhys was born on Dec. 4, 2019, after what her parents described as a perfectly normal pregnancy. But while she looked healthy on the surface, on the inside, she was already losing ground. It would take months for her parents to realize it.

“We got to about three, four months, and I noticed she wasn’t moving as much as other babies,” Ceri Devine said.

Rhys was missing milestones associated with the normal development of a baby; her parents said she wasn’t performing simple movements, like trying to raise her head and moving her legs.

“You pick her up and she slips right through your fingers because she’s got no muscle tone,” Ceri Devine said. “It’s like holding a 19-pound newborn.”

As COVID-19 forced doctors into telemedicine, the Devines were relegated to explaining Rhys’ condition to her doctor virtually. Rory Devine said doctors consistently told them Rhys only had low muscle tone. She was placed on a physical therapy regimen, but her condition continued to worsen.

Ceri Devine said that by six months old, Rhys still wasn’t able to move her legs. Watching other people’s children growing up on Instagram, she said she’d get “frustrated” because their kids were already sitting up despite being months younger.

“The entire time this was going on, I was saying, ‘Look, the doctor said it’s fine. It’s fine. I was a slow developer,"” Rory Devine said he’d told his wife. “And she was the one who was consistently saying there’s something wrong.”

The family was finally able to schedule an in-person appointment with a pediatrician on May 27, 2020. It was during this appointment that the doctor told them Rhys might have a neurodegenerative disease called spinal muscular atrophy, or SMA.

The condition is typically inherited when both parents carry the mutated version of a gene that helps the body maintain its motor neurons. The disease causes the loss of these specialized nerve cells and weakens movement in the muscles, and it worsens with age, according to the National Institutes of Health.

“Those nerve cells die over time,” said Dr. Mary Schroth, chief medical officer of the nonprofit Cure SMA. “People with SMA lose the ability to walk, to sit up, even to swallow and to breathe.”

SMA affects about 1 in 8,000 to 10,000 people worldwide. Rhys was diagnosed with the most common form of the disease — type 1, also known as Werdnig-Hoffmann disease — which affects about half of those diagnosed, according to the NIH.

“The first thing when you look it up on Google is most infants diagnosed with SMA type 1 do not live past 2 years of age,” Ceri Devine said.

Now keenly aware of their daughter’s deteriorating health, the Devine’s quickly sought help from neurologist Dr. Perry Shieh at the University of California, Los Angeles. Shieh, an expert on SMA who’s treated about 100 babies with the disease, confirmed Rhys’ diagnosis.

Shieh said it’s difficult diagnosing SMA because so many babies born with it “look essentially normal.” But he said a lot of those babies “never obtain the ability to sit. So they miss that milestone.”

“When we see babies or children missing their milestones, it gets us concerned,” he said.

The confirmation of their daughter’s condition devastated the new parents. Ceri Devine said that while out on walks, she’d see other kids living their lives normally, “running around, on their scooters,” and it’d make her think about how Rhys will “probably never do that.”

“We weren’t sure if she was gonna be alive,” Rory Devine added. “I had almost come to terms with the fact, I’m like, ‘Well, this will destroy us.’ Like, no couple can survive the loss of their first kid.”

In recent years, however, new advances in SMA treatments have begun to help the thousands of children diagnosed with the disease. Rhys began receiving a gene therapy called Spinraza shortly after her diagnosis. The drug is injected directly into cerebrospinal fluid in the patient’s lower back, according to Cure SMA, and is meant to fix the splicing errors in the mutated genes.

With that long-term financial burden looming, the Devines began to look at a newer gene therapy option called Zolgensma. The one-time shot delivers a functional version of the mutated or missing gene that causes SMA, according to the Food and Drug Administration. It’s meant for children under 2 years old, and the earlier a child receives it, the higher their chance of living a relatively normal life.

“It’s a degenerative condition, so it’s a progressive condition,” Shieh said. “Another way to think about it is you’re sliding downhill and there’s really no way to go back up the hill. So what you want to do is provide some type of treatment that prevents this child from sliding further down the hill.”

But Zolgensma isn’t cheap, either. In fact, it has been called the most expensive drug in the world, with one dose costing over $2 million.

During their ordeal with Rhys, the Devines continued to work full time. Ceri Devine is a red carpet event planner while her husband works in recruiting. But while they were fortunate enough to have health insurance, the approval process for Zolgensma is complicated and time-consuming, Ceri Devine said.

“I spent just all day, every day on the phone with the insurance company,” she said.

Novartis, which manufactures Zolgensma, said the price of the drug is comparable to other gene therapies and that on average, it’ll only cost about half of what a family would spend on other SMA treatments over a decade. The company also said that families with insurance coverage are likely to pay far less than the label price.

“We currently have policies in place that cover about 97% of commercial patients, and Medicaid access continues to progress with [about] 86% of lives covered,” the company said in a statement.

Although she said it makes her feel “sick to think that there’s a price tag on a child’s life,” Ceri Devine said she was willing to do anything necessary to ensure Rhys received the drug.

“I said to Rory, ‘If this is what she has … and we have to get this treatment, we’ll do whatever it takes to get it.’ I said I would sell my organs,” Ceri Devine said. “I was prepared to move back home … with my parents if we had to. It didn’t really faze me because the cost of it didn’t matter. Whatever it took, we were gonna get our daughter this medication.”

Three months after Rhys was diagnosed with SMA, the Devines’ persistence paid off. Rhys was given the injection of Zolgensma on Aug. 14, 2020. And just three days later, her parents began seeing signs that the drug was working, when she lifted her head without their help, Rory Devine said.

Rhys’ strength continued to progress and she soon began to achieve the milestones for which the Devines had waited too long. By November 2020, Ceri Devine said Rhys had begun to sit unassisted on her own.

“She’s made some wonderful gains,” Shieh said. “She’s lifting her arms up more than when I first met her, she’s lifting her legs up more. She’s breathing a bit better. So, I’m quite optimistic that she’ll be able to continue to gain some motor skills and some other milestones.”

While monitoring Rhys’ progress after the Zolgensma shot, Ceri Devine joined a Facebook group of parents of kids with SMA — many of whom did not know what SMA was until their child was diagnosed.

Only 36 states currently mandate SMA screening for infants, meaning that nationwide, more than a quarter of children are never screened for the disease. California enacted its screening mandate six months after Rhys was born.

“For SMA, newborn screening saves lives,” Schroth said. “It’s an important disease to diagnose early and treat early. … It warms my heart so much to know that patients may not need my services someday. As a pediatric pulmonologist, I am good with that. Or, they [will] need different services from me. I’m just so happy not to grieve with the family’s who’s losing their child.”

Rhys, who’s now 18 months old, has become capable of rolling over on her own and, although she sits in a wheelchair to get around, she’s been learning to stand with the help of specialized shoes, leg braces and a physical therapy machine. In February, she stood up by herself for a total of three seconds.

Although she continues to undergo breathing treatments and different physical therapy exercises, the Devines are hopeful Rhys will continue to improve.

“No mom wants to see their kid in a wheelchair forever,” Ceri Devine said. “It’s my hope that she’ll be able to walk and take steps and have some independence. … But, realistically, she will probably have a wheelchair as her primary mode of getting around.”

They also hope that by sharing Rhys’ story, more families with children with SMA will be able to access treatment early and experience the same success.

“We can’t stop it from happening to anyone else, but [we can] just educate people on what SMA is,” Ceri Devine said. “There are these treatments for it and the sooner you catch it, the better off these babies will be.”