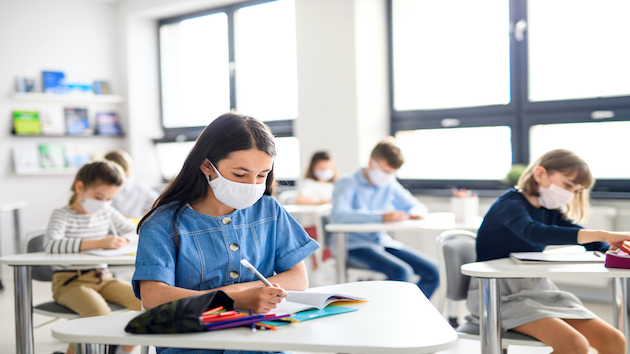 (WASHINGTON) —Dr. Rochelle Walensky, head of the Centers for Disease Control and Prevention, said Monday that the public health agency is reviewing its recommendation to schools that students and staff must stay 6-feet apart inside classrooms if viral transmission is high in their local community.

Walensky said the agency is looking at a recent study that suggested in-person instruction might be just as safe if children stay 3-feet apart so long as there is strict compliance with wearing masks.

Any change in CDC guidance would likely have big implications for in-person instruction this fall. The CDC’s insistence on 6-feet of spacing in COVID hotspots has encouraged many U.S. school districts — dealing with crowded hallways and classrooms — to stick with virtual or hybrid learning so long as case numbers remain high.

But critics of the guidelines, including many parents, say the recommendations are too strict and will unnecessarily keep kids at home. At the time the CDC released its school guidance last month, more than 90% of schools were in communities with high transmission, although that number has been steadily declining.

“As soon as we put out our guidance, among the biggest challenges that we were aware of was the fact that schools were having a hard time with the 6-foot guidance,” Walensky said. “And that, of course, prompted more studies to say, ‘Is 6-feet necessary in the context of mask wearing?"”

Researchers have long maintained that respiratory viruses generally transmit via large droplets when people are standing within 6-feet of each other. Walensky said the 6-feet rule comes from what research on other similar viruses and that less is known about 3-feet of distancing.

One study, published last week in the journal Clinical Infectious Diseases, looked at 242 school districts in Massachusetts last fall that imposed mandates of either 6-feet or 3-feet of distancing. The study found that with universal mask wearing there was no detectable difference in COVID-19 infection rates among student and staff.

While the infection rates in the Massachusetts study were similar, the authors did not look at whether new cases were transmitted in school or whether they were obtained outside of school. Also, most schools that the researchers studied did not test for asymptomatic spread — a critical component to curbing infection rates.

For now, she said, the CDC is looking at all data carefully. She did not say when the CDC might revise its guidelines for schools, if at all.

“The question actually prompted more studies to be done,” Walensky told reporters at a White House press briefing when asked by ABC News about the latest study.

“So we’ll have more forthcoming. We’re taking all of those data carefully and revisiting our guidances in that context,” she added.

The question though of 6-feet versus 3-feet is an urgent one for many parents and school districts looking ahead to fall.

Case numbers have declined dramatically in recent weeks, but the U.S. is still finding some 52,500 COVID-19 cases per day on average. And while health officials hope the vaccine rollout will be able to reduce those numbers, there are concerns that new mutations of the virus — which form in areas where viral transmission is widespread — could impact the effectiveness of the vaccine.

Also, if too many people refuse to get the vaccine and won’t follow other distancing protocols, COVID-19 case levels could remain stubbornly high through fall.

Asked about the Massachusetts school study, Dr. Anthony Fauci told CNN’s “State of the Union” on Sunday that the CDC is “well aware that data are accumulating” in favor of reducing the distance guidelines in schools to 3-feet. He said the CDC is doing its own research to have a complete picture of the data before changing its guidelines.

“What the CDC wants to do is accumulate data, and when data shows that there is ability to be three feet, they will act accordingly,” said Fauci, the nation’s top infectious disease expert.

Dr. Joe Allen, director of the Healthy Buildings Program at the Harvard T.H. Chan School of Public Health, said he supports the idea of 3-feet of distance among students and 6-feet among staff.

“The rationale, I think is very straightforward and defensible,” said Allen. Kids are different from adults because “they transmit less, they’re less likely to get infected and certainly if they get it, they’re much less at-risk for dying.”

Dr. Ashish Jha, dean of the Brown University School of Public Health, has also spoken out about implementing other control measures over 6-feet of distancing.

In a Senate hearing last week, Jha said schools should focus on masking, ventilation, testing and prioritizing teachers for vaccines.

“I did not mention three feet versus six feet. I did not mention deep cleaning of surfaces,” Jha said. “I think there’s a lot that’s gotten us distracted. I think if we focus on these things, we can keep teachers safe, we can keep kids safe, and we can open schools — and we have the ability to do all of this now, not six months or a year from now.”

Dr. Tarun Jain contributed to this report. He is a resident physician in internal medicine and pediatrics and a member of the ABC News Medical Unit.