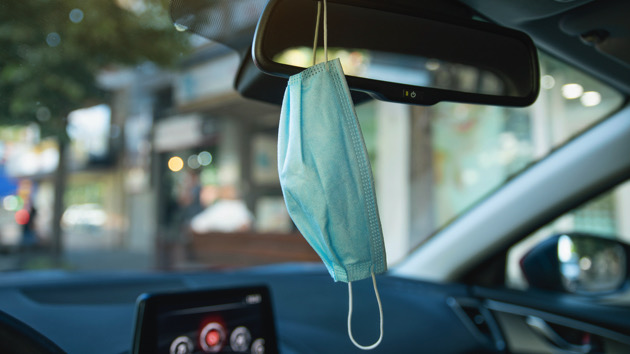 (NEW YORK) — Still concerned about COVID-19 transmission in automobiles? One carmaker may have a novel approach to keeping passengers safe.

When the SUV’s heating, ventilation and air conditioning [HVAC] filtration system is turned on, trillions of ionized water particles are released into the cabin through the front and rear air vents, according to JLR. These particles “denature,” or essentially kill the virus on contact, the automaker says.

“We want people to know the capability of the vehicle,” Nick Miller, program chief of the new Range Rover, told ABC News. “This is the first Range Rover to have the next generation system.”

Health officials and practitioners have long underscored the importance of proper air filtration and ventilation for lowering transmission of the novel coronavirus. The Environmental Protection Agency states on its website that air cleaners and HVAC filters can help reduce airborne contaminants, including viruses, in a building or small space when used properly, but they are not sufficient on their own.

“By itself, air cleaning or filtration is not enough to protect people from COVID-19. When used along with other best practices recommended by CDC and other public health agencies, including social distancing and mask wearing, filtration can be part of a plan to reduce the potential for airborne transmission of COVID-19 indoors,” according to the EPA.

Panasonic says its nanoe X technology “inhibits bacteria and viruses, moulds, allergens, pollens and hazardous substances … and helps clean the air that we breathe.” The technology can be found in homes, offices, hotels, schools and spas and has been tested globally in laboratories and institutions. Experts interviewed by ABC News said the technology could help in vehicles but were skeptical of its overall impact compared to mask-wearing.

JLR partnered with Perfectus Biomed Ltd, a microbiology and virology lab, to test the company’s prototype system. A sealed chamber simulated “a vehicle ventilation system in recirculation mode over a 30-minute cycle,” JLR said. The result? The system inhibited the virus’s spread by as much as 97%, the automaker said.

The Range Rover filtration system, which also includes a PM2.5 filter (blocking particles down to 2.5 microns in size), discharges 10 times the amount of ionized particles than the previous system, Miller noted. Moreover, the nanoe X technology was also tested on the virus in a closed lab environment by Texcell, a research organization that specializes in viral testing and immunoprofiling, which claimed “over 99.99% of novel coronavirus activity was inhibited within 2 hours.”

Since the technology collects invisible moisture in the air, the Range Rover’s filtration system does not need servicing or updating, Miller said. And there are limitations, he acknowledged.

“We’re absolutely not claiming we’re a medical device,” Miller said. “No way are we claiming that you will not get COVID in the car. But it decreases the likelihood.”

John Brownstein, Ph.D., an ABC News medical contributor, epidemiologist and chief innovation officer of Boston Children’s Hospital, said the risk of COVID transmission in an automobile is small but “turning on these air filtration systems can create an additional level of protection.”

“You can’t social distance in a car,” he pointed out. “These systems could be a useful tool. But if you’re really concerned [about COVID], wear a mask with other passengers.”

He added, “The new trend in public health is air quality. But there’s a gimmicky part too.”

Dr. Rajat Mittal, a professor of mechanical engineering and medicine at Johns Hopkins University, said he doubted the claims made by Panasonic and Jaguar Land Rover. In the Texcell test, conducted in a 45-liter chamber, a piece of gauze saturated with the SARS-CoV-2 virus solution was placed in a petri dish and exposed to the nanoe X technology for two hours.

“The inside volume of a car is 3,000 to 5,000 liters — 100 times bigger than this chamber in the lab,” Mittal told ABC News. “In the test, the virus couldn’t move and was locked in place on a piece of gauze. In a real situation, an infected person will circulate and spread the virus in the air via little droplets.”

He added, “I really think more is needed to convince someone like me with a scientific background that it is a valid claim.”

Advanced, powerful infiltration systems in automobiles are starting to become more common. In 2015, Tesla was the first to install HEPA-rated filters in its electric vehicles. The carmaker claims passengers can “literally survive a military grade bio attack” when the Bioweapon Defense Mode is running.

The large HEPA filter in the new Mercedes EQS all-electric sedan eliminates 99.6% of pollutants — fine dust, microparticles, pollen and other substances — from the cabin, according to Mercedes. Moreover, the sedan’s Energizing Air Control Plus system cuts odors such as sulfur dioxide and nitrogen oxides.

Volvo, Ford and Lincoln are also rolling out premium air filtration systems. Volvo’s Advanced Air Cleaner technology comes with a sensor that measures PM2.5 levels inside the cabin. Lincoln says its Auto Air Refresh, available in the Aviator SUV, is a “holistic air filtration and active air monitoring system” that helps “clean the cabin air by filtering out particles caused by atmospheric dust, tobacco smoke, smog and some allergens, including pollen.”

Ford’s all-new standard certified cabin air filters, called Ford Refresh95, will be available in a majority of its vehicle lineup by the end of 2023.

James Dickerson, chief scientific officer at Consumer Reports, said more high-tech filtration systems, like the one in the Range Rover, may be coming to the market if automakers see high demand from consumers.

“Introducing an ionization system that’s effective and can fit inside the tight confines of an automobile … this is novel technology” for the industry, Dickerson told ABC News. “We very much support manufacturers that are looking for ways to make their vehicles more pleasant and more attune to the needs of consumers particularly as it relates to air quality.”

Mittal of Johns Hopkins said vehicle air filtration systems are only effective with a HEPA filter and a fast replacement rate of air inside the cabin.

“A HEPA filter will definitely catch viruses and the AC needs to be on with air recirculated quickly,” he said.

There are downsides, however: Some filters would have to be maintained and replaced and any benefits may not outweigh the costs, he argued.

“I wouldn’t pay even $100 to put one in my car — they’re not worth the money,” he said. “Wear a mask and open the windows. That’s the best thing you can do to reduce transmission.”