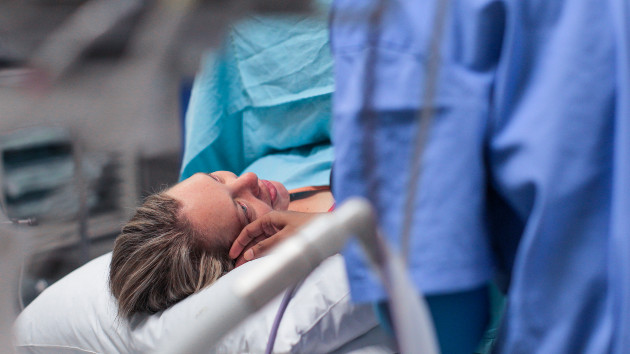 (NEW YORK) — During her pregnancy with her first child, Emily Brown said she planned to have a natural, non-medicated birth.

But the way Brown, 34, of Oklahoma, ended up giving birth to her daughter was through a cesarean section when she went into labor at 32 weeks.

“I remember just being really scared, because you’re on this table and you can’t move because the nerve block keeps you from moving, but you’re very much aware and awake and you know what’s going on,” Brown told ABC News’ Good Morning America. “It was a weird feeling.”

Brown said because she had been so prepared with her birth plan for a non-medicated, vaginal birth, she had no idea what a C-section entailed.

“I knew what the end result was, but in terms of how we got to the end result, I had no idea,” she said. “And then I hadn’t put any thought into recovery at all, so it was really tough.”

A cesarean section is a surgical procedure performed to deliver a baby through the birthing person’s abdomen, instead of the vagina. It is a procedure that in some cases may be planned and in others is done on a more emergency basis if the labor is not progressing or if the health of the mom or the baby is in danger, according to the American College of Obstetricians and Gynecologists (ACOG).

Nearly 32% of all deliveries in the United States are done by C-section, according to the Centers for Disease Control and Prevention.

And while that amounts to over one million births in the U.S. per year, C-sections can still be a taboo topic for many moms.

“I just feel like the whole topic needs to be discussed more,” said Raven Williams, who gave birth to her first child, a son, in October. “There is nothing really to prepare you for, in the event that a [C-section] happens, this is what you’ll have to go through.”

Williams, 26, of South Carolina, said she also planned to give birth vaginally but ended up delivering via an emergency C-section when doctors were not able to locate her son’s heart rate.

Williams said that while the most important thing to her is that she and her son are both healthy and doing well, she felt like she missed out on parts of childbirth.

Dr. Jennifer Ashton, ABC News’ chief medical correspondent and a board-certified OBGYN, said feelings of embarrassment or failure can be common in women who undergo C-sections, but added that it is an important stigma to break.

“I want to put that to rest once and for all,” she said. “Any time somebody grows a human being and delivers that human being outside their uterus to rest of the world, that’s already a victory.”

Ashton added that the goal of childbirth, whether vaginal or C-section, is simply, “Healthy baby, healthy mother.”

To help break the stigma around C-sections, Ashton broke down six common myths about the procedure:

Myth #1: A C-section is a minor procedure.

With a C-section, a woman is given either general anesthesia, in which case they are not awake during the procedure, or an epidural, which numbs the lower half of the body, where the procedure is taking place, according to ACOG.

During the procedure, one incision is made through the wall of the abdomen and another in the wall of the uterus. It is through those incisions — which can be vertical or horizontal — that the baby is delivered, and then the umbilical cord is cut and the placenta is removed, according to ACOG.

Stitches are used to close the uterus and abdominal skin, and a woman is left with a scar, typically just above the pubic area.

A C-section delivery room is an operating room that typically has at least four to five medical personnel present, including two obstetricians and an anesthesiologist, Ashton explained.

In most cases, a support person for the birthing person is also allowed in the delivery room during a C-section.

Myth #2: Giving birth via C-section is a failure.

“I’ve delivered over 1,500 babies in my career as an OBGYN, and I will tell you that whether the baby comes out via C-section or vaginal delivery, there are no extra points for use of one path of delivery versus another,” Ashton said. “One is not the easy way out.”

Ashton reiterated that a C-section is a complicated procedure that comes with its own risks and benefits and does not have any reflection on the person giving birth.

A C-section may be necessary, for example, if a baby is not in a good position in the uterus to allow for a vaginal delivery or if a baby is too big or if there is more than one baby being delivered, according to ACOG. There may also be situations where contractions do not open the cervix enough for a vaginal delivery or the baby’s umbilical cord becomes pinched or compressed and a C-section is required.

In other cases, a C-section may be necessary in the case of a maternal health condition such as gestational diabetes or high blood pressure, according to ACOG.

“The key is remembering a safe and healthy delivery for both mom and baby is the goal,” Ashton said. “Understand that the process of conceiving a baby, carrying a pregnancy for months, hopefully full-term or near the full-term, that is impressive. That is miraculous.”

She continued, “I would encourage women to not focus too much on the path of delivery. There is so much to be impressed with and grateful for.”

Myth #3: All C-sections are necessary.

C-sections are necessary in some births but not in all, which has prompted an effort in the U.S. to reduce the rate of unnecessary C-sections.

The World Health Organization considers the ideal rate for C-section births to be between 10% to 15% — two to three times lower than the current U.S. rate

In 2020, the Department of Health and Human Services set a goal to reduce low-risk cesarean deliveries by 25% as part of its action plan to reduce the maternal mortality rate in the U.S., which has the highest rate among industrialized nations.

Complications from C-sections can include infection, blood loss, blood clots, injury to the bladder and reaction to medications and anesthesia, according to ACOG. In addition, a first birth by C-section raises the likelihood of repeated C-sections for future childbirths, which can increase the risk of complications.

Even later on in life, women who have had C-sections may face complications from other surgeries because of the scar tissue left inside their abdominal cavity, according to Ashton.

The potential complications, though rare, are a reminder, according to Ashton, that C-sections should only be performed when deemed medically necessary by a qualified medical professional.

“This is a complicated issue, because our C-section rate in general in the United States is too high, and that’s not an arbitrary assessment,” Ashton said. “That rate is associated with some of the major risks, some of which are potentially life-threatening for a woman in the future.”

She continued, “So, yes, we need to be focused on bringing our rate down, but, yes, we also need to be free to do a C-section when indicated in the discretion of that board-certified obstetrician, who is a trained surgeon, or the assessment of the midwife who is working in conjunction with the obstetrician.”

Ashton’s No. 1 tip for women is to ask as many questions as possible before, during and after childbirth.

“You absolutely want to know, what was the indication? What were the real medical terms? Why was a C-section recommended?” Ashton said. “Get as much information about the indication for that procedure as possible.”

After a C-section, Ashton recommends that women ask their obstetrician what type of incision they have on their uterus, because that potentially affects whether they have to have another C-section with a future childbirth.

One of the most common concerns Ashton said she hears from patients is that a C-section will be painful.

While there may be some pressure felt during the procedure, a C-section should not be painful, according to Ashton.

During a C-section, a woman is either asleep under general anesthesia or has an epidural that makes them numb from the belly button down, Ashton explained.

“We actually do have to do some maneuvers to get that baby out of the uterus, so the pressing on the woman’s belly can be pretty intense,” she said. “But they should be feeling no pain whatsoever in terms of anything sharp.”

That said, just as individuals who give birth vaginally may feel pain following delivery, those who undergo a C-section may feel pain after the procedure at their incision sites. This type of pain, however, is typically relatively mild and well-controlled with medications.

Women who give birth via C-section are often confronted with the reality that they will need more time than expected to recover, according to Ashton.

“I think the biggest misconception after a C-section is that because they just had a baby, in two days they’ll be up and walking around and back to normal,” she said. “You have to remember that it’s still a major operation.”

Ashton explained that a C-section requires a “major incision” that takes time to heal.

“We have to separate abdominal muscles to get to the uterus,” she said. “There is a significant amount of post-operative pain and discomfort associated with a C-section that can and should be safely treated.”

After a C-section, a mom is typically able to hold their baby right away, barring any emergency complications for the mom or the baby. From the operating room, the mom will go to either the recovery room or their hospital room, where their vitals will be regularly checked, as well as their abdomen for bleeding, according to ACOG.

Post-C-section recovery includes resting in bed to let the incision heal and for the feeling in the lower body to return. An average hospital stay for a C-section delivery is two to four days, according to ACOG.

Once at home, women should not lift anything heavier than their baby for the first few weeks, and it is recommended that women not have sex and not place anything in their vagina for several weeks to allow for healing, according to ACOG.

In the first few weeks after a C-section, women may experience mild cramping, bleeding or discharge, pain in the incision and bleeding with clots and cramps, according to ACOG, which advises women to call their doctor if they experience fever, heavy bleeding or worsening pain.