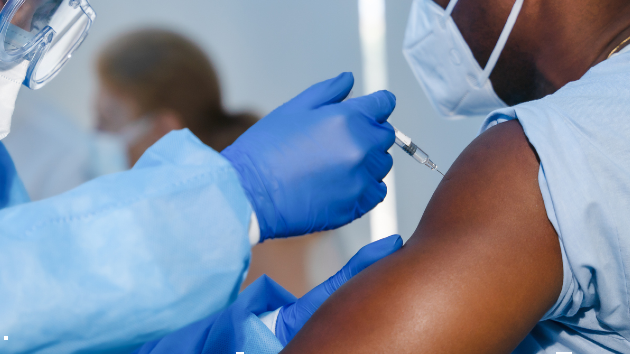 (NEW YORK) — When Rev. Miniard Culpepper, the senior pastor of Pleasant Hill Missionary Baptist Church in Boston, rolled up his sleeve last month alongside several other faith leaders, he wanted to “be a role model” and encourage people in his majority-Black community to get the COVID-19 vaccine.

Due to a combination of historically rooted mistrust of the medical system, vaccine hesitancy and often, a lack of access, many Black Americans, who have been disproportionately impacted by the virus, are being vaccinated at rates concerningly lower than white Americans.

“Vaccines are such a critical piece of getting us out of COVID and cutting down the number of deaths in our community,” Culpepper told ABC News. “It’s our responsibility to help educate our people, and to be a role model and getting the vaccine first. I think it’s a trust issue. People trust the pastors, to lead them in the right direction.”

Despite these local efforts and 27 million Americans having received one or more doses in the first weeks of COVID-19 inoculations, preliminary data indicates Black Americans have been vaccinated at rates significantly lower than white Americans — and often, at levels below their share of their state’s population, according to an ABC News analysis of statistics from 15 states, and national demographic information released by the Centers for Disease Control and Prevention.

The CDC is still struggling to understand the scope of this problem, with race data missing from a staggering 48.1% of data submitted by states. Early on in the pandemic, race data was similarly missing in data reporting of COVID-19 cases and deaths.

“I’m worried about how behind we are,” she said Monday.

Though incomplete, experts say the agency’s initial findings are concerning.

The ABC statistical analysis examined state data through Jan. 31, from Alaska, Colorado, Florida, Indiana, Louisiana, Mississippi, Missouri, New Jersey, Ohio, Pennsylvania, Tennessee, Texas, Vermont, Virginia and West Virginia. Race and ethnicity data has not been provided by many states, and the data is often incomplete or inconsistent among states that did release data.

Although several other states offer vaccination data by race, they break down the data by doses instead of the number of individuals vaccinated.

In Pennsylvania, Black residents represent 12% of the population, and white residents 81.6%. So far, less than 1.8% of those vaccinated have been Black, while nearly 57% of those vaccinated are white. Thirty-eight percent of the remaining portion was categorized as “unknown,” 2.8% was classified as “other,” and 0.19% was listed as individuals who identify as Asian.

And in Tennessee, although Black residents represent 17% of the state’s population, they account for just 5.8% of vaccinations, while 65% of those vaccinated are white residents, who make up 78% of the total population.

“Communities of color have been hit the hardest by the pandemic and are the least likely to have access to the vaccine,” said Dr. Georges C. Benjamin, executive director of the American Public Health Association, an organization made up of public health professionals which aims to improve public health equity, said in a press release Tuesday. “Our approach to vaccination must center on equity.”

With new, more contagious variants now spreading in the country, experts say it’s more urgent than ever for everyone to get vaccinated quickly.

“We could be on the losing end of a battle with these new variants, which are likely going to take hold at the community level. We know that vaccines still work, so the question is, can we create some form of urgency, while also explaining that these vaccines are incredibly safe,” said Dr. John Brownstein, chief innovation officer at Boston Children’s Hospital and an ABC News contributor.

There are several factors likely driving the apparent racial disparity in vaccination rates, according to experts, beginning with a significant digital divide which “mirrors, unfortunately, the socio-economic divide that has been so prominent between Black Americans and white Americans in this country,” Dr. Chris Beyrer, professor of epidemiology at the Johns Hopkins Bloomberg School of Public Health, and senior scientific liaison at the National Institutes of Health’s COVID-19 Vaccine Prevention Network, told ABC News.

Older Black Americans, for instance, are less likely to have a computer in the home, he said, and states across the country are using email and web portals to sign-up for vaccination, as well as to convey critical information.

Many of these sites are complicated to use, and it is also hard to make an appointment online.

“You may have to stay online for hours, or be on the phone for hours,” said Dr. Belinda Alexander, an internal medicine specialist at Memorial Hospital in Gulfport, Mississippi, who has been working to ease anxieties surrounding the vaccine in minority communities.

A second roadblock is accessibility, with vaccination centers often located at a distance from Black communities, according to Beyrer.

“The distribution plans themselves have not always paid enough attention to making sure that they’re getting out to underserved communities. That also means not doing as well with African Americans. For example, we saw this with the testing. Many states started with drive-by facilities for testing. But what if you don’t have a car, and we’re discouraging people from ride sharing. How are people supposed to get there?” Beyrer said.

This concern was echoed by Brownstein.

“If people are on the edge of making a decision about getting that shot,” the inconvenience of having to drive substantially longer to a site can discourage, Brownstein said.

Experts say the very same phenomenon that makes Black Americans more likely to get sick with COVID could also be making it harder for this group to access a vaccine: insufficient access to health care.

Black Americans have greater rates of comorbidities, including hypertension, diabetes, pulmonary/cardiovascular disease and obesity, rendering them more vulnerable to COVID-19, according to a study from University of Tennessee.

At the most fundamental level, there are major social and structural challenges around our health care system, concurred Beyer, the result of decades of structural racism and inequalities.

“We always have to remember that African Americans have lower access overall to health care in this country, and that is also why they have shorter life expectancies. And it’s also one of the main reasons that they have had higher rates of COVID hospitalization and loss of life,” Beyrer said.

Deep distrust of the medical system, stemming from a history of discrimination and unethical medical experiments, such as the Tuskegee syphilis study, has driven the high levels of vaccine skepticism in the Black community, community leaders say.

“We have to look at the mistrust that has occurred in African American community,” said Alexander.

Culpepper was himself initially reluctant to take the vaccine, partly because of the Tuskegee study, he said, but after meeting with focus groups where questions about the vaccine were answered, he and others “felt more comfortable with moving forward with actually taking this shot ourselves.”

Such vaccine hesitancy does play an important role, said Beyrer.

Further, he said, Black Americans had particularly high rates of mistrust of the Trump administration.

It is fundamentally a fear of the unknown, noted Alexander, so “we may not want to sign up for the vaccine because we’re not being educated. We need for more scientists, physicians and nurses to explain to Black communities the purpose and benefits of the vaccine.”

Education begins with clear messages, but also with “messengers” like church leaders, who are trusted by the community, added Beyrer.

In an effort to make his congregants more comfortable and confident, Culpepper hopes to be able to offer vaccinations at the church. As pastors, “we’re in every phase of their life. They are depending on us, and so, it’s significant that with this vaccine, it’s no different than what we do for them on a normal basis.”