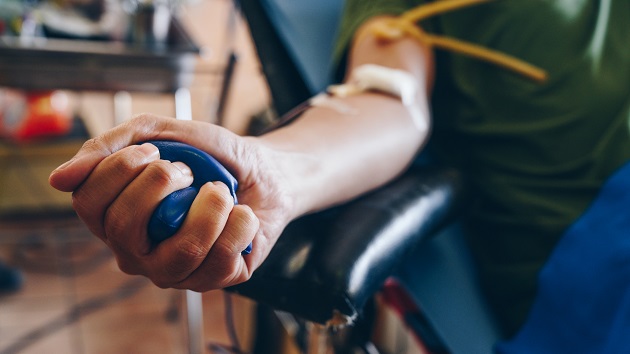 (WASHINGTON) — For the first time, the Biden administration is commenting on the Food and Drug Administration’s long-time blood donation guidelines, which are impacting the LGBTQ+ community by preventing gay and bisexual men from being eligible blood donors.

The statement, made by a White House official exclusively to ABC News, acknowledges the painful origins of the policy and comes on the heels of the American Red Cross declaring their first-ever national blood crisis last week, as supplies at hospitals and blood banks become dangerously low.

Current U.S. policy holds that sexually active gay or bisexual men must abstain from sex for at least three months before they’re allowed to donate blood. The rule applies to gay and bisexual men who are monogamous and those who test HIV negative and are practicing safe sex. It also includes gay and bisexual COVID-19 survivors who wish to donate convalescent plasma, rich with antibodies, for research.

The restriction on blood donations came out of the HIV/AIDS crisis of the 1980s, when limited testing technology and capacity existed to screen blood for HIV. In 1983, the FDA implemented a lifetime ban on blood donations from all men who had sex with men after 1977.

The FDA removed the lifetime ban and enacted a 12-month deferral period in 2015, meaning gay or bisexual men had to abstain from having sex with other men for at least 12 months before donating blood. That deferral period was reduced to three months in April 2020 amid blood supply shortages in the beginning months of the COVID-19 pandemic.

Despite cutting of deferral periods in recent years, the current federal policy remains a blanket policy covering LGBTQ+ people, and does not take into account individual risk.

“The legacy of bans on blood donation continues to be painful, especially for LGBTQI+ communities,” the White House official told ABC News in a statement. “The President is committed to ensuring that this policy is based on science, not fiction or stigma. While there are no new decisions to announce at the moment, the FDA is currently supporting the ‘ADVANCE’ study, a scientific study to develop relevant scientific evidence and inform any potential policy changes.”

In 2020, ABC News broke the story that several major blood donation organizations — including the American Red Cross, Vitalant and OneBlood — announced that they were working together in an FDA-funded study (ADVANCE: Assessing Donor Variability And New Concepts in Eligibility) to provide data to determine if eligibility based on an individual’s risk could replace the time-based deferral system while maintaining the safety of the blood supply.

While the lead researchers involved in the study previously told ABC News their goal was to present their findings to the FDA in late 2021, the FDA revealed to ABC News that the study is ongoing, amid what the American Red Cross is calling “the worst blood shortage in over a decade.”

While the American Red Cross said that there is no clear data that would suggest that changing the current blood donation policy would significantly increase the number of blood donations, if the deferral period were lifted, an additional 360,000 men would likely donate, “which could help save the lives of more than a million people,” according to LGBTQ+ advocacy group GLAAD.

In what seems like a clash over risk vs. stigma, LGBTQ+ advocacy groups and many in the medical community are aligned on the idea that the current federal policy on LGBTQ+ blood donor eligibility is largely discriminatory.

“We believe blood donation eligibility should not be determined by methods that are based upon sexual orientation and we’re committed to achieving this goal,” the American Red Cross said in a statement to ABC News.

Sarah Warbelow, legal director for the Human Rights Campaign, also told ABC News, “Just like other individuals throughout the country, many people have sex on a regular basis, including with partners and spouses.”

And in 2020, Dr. Patrice Harris, president of the American Medical Association, told “Good Morning America”: “The AMA has been a long-term advocate of using a risk-based approach, rather than stigmatizing one group of people. So we believe there should not even be the three-month deferral, but that we should use a risk-based approach.”

Evolution is on omicron subvariants’ side