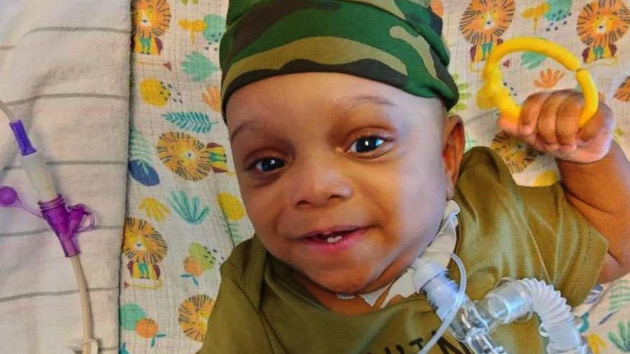 (INDIANAPOLIS) — For the first time in his life, 15-month-old Kendall Jurnakins is home.

The baby boy spent the first year of his life in the neonatal intensive care unit at Ascension St. Vincent Women’s Hospital in Indianapolis before being cleared for discharge on March 16.

Hospital staff gave the boy a joyous send-off, lining up for a cheer parade and applauding Kendall as he made his way home with his parents, Sparkle and Keith Jurnakins.

It was a long time coming for the boy and his mother, who were both so sick at one point that doctors worried they both might not make it.

Sparkle Jurnakins, 41, a mom of three, had to get an emergency cesarean section due to high blood pressure complicated by the fact that she also has diabetes and only one kidney.

“When he was born at 25 weeks and based on his weight, national data and international [data], his chance to survive was around like 50 to 60% … this is only survival, not survival with complication or long-term problems, but he actually beat some odds,” neonatologist Dr. Taha Ben Saad, who cared for Kendall, explained to Good Morning America.

At 25 weeks, Kendall had various complications from his prematurity. He had respiratory distress syndrome and chronic lung disease and later had problems eating, too.

“I was going to visit him every day. He was really sick in the beginning,” Jurnakins said. “We couldn’t figure out why he couldn’t get his lungs together. So we had to, they told me that his lungs wasn’t really fully developed like they should. They was gonna have to trach it. So we ended up having to have that big surgery, a trach put in for him to be healthy.”

Kendall received a tracheostomy and was placed on a ventilator to help him breathe. He later had to get a gastrostomy tube as well for feeding.

Eight months into Kendall’s treatment, a major complication occurred — Jurnakins contracted COVID-19 and checked herself into the same hospital.

“I remember going into the hospital saying I couldn’t breathe. That was the only thing I remember,” Jurnakins recalled.

Like her son, Jurnakins had to be placed on a ventilator and get a tracheostomy. She spent two months in the intensive care unit.

“COVID almost took me out. … From August to October, I was in a coma. And then in the hospital till almost December,” Jurnakins said.

“It was very emotional when his mom got sick in the hospital,” Ben Saad said. “We thought she’s not gonna survive and then all his nurses were really worried.”

Along with her doctors and nurses, Jurnakins also credits her husband for her own survival. “Him being by my side through everything, I mean, it was so scary. Everything was scary,” she said. “From me almost dying, to my son going through what he was going through, where they were just like, ‘Oh, he’s not gaining weight. He’s not doing this.’ It was just all these ups and downs, where we were just very worried that Kendall wasn’t gonna come out of the hospital as a regular child.”

Against the odds, Jurnakins recovered and she was able to reunite with her baby boy in early December 2021.

“I thought he was not gonna remember me because he was so tiny when I went in the hospital,” Jurnakins said. “Soon as I got there, he just laid on me and looked at me the whole time. It was the best feeling in the world.”

Throughout his 460-day stay in the NICU, Kendall reached a lot of firsts — everything from his very first tooth to learning how to sit and crawl.

Today, Jurnakins said her youngest son is “a bundle of fun” and has a delightful and strong personality. “He’s Mr. Personality. If you ever meet him, you will always remember him. He’s funny, he likes attention,” she said.

When he was discharged, Jurnakins said it “was the best day of my life.”

“I couldn’t believe it. I was just like, ‘Oh, my baby really made it. Oh, we’re coming home. Oh, Lord. Thank you,” she said. “I prayed. I cried. I was happy. I was sad. I was everything but I was ready for my baby to come home.”

As she reflected on their extraordinary journey over the last 15 months, Jurnakins said she had a message for her little boy.