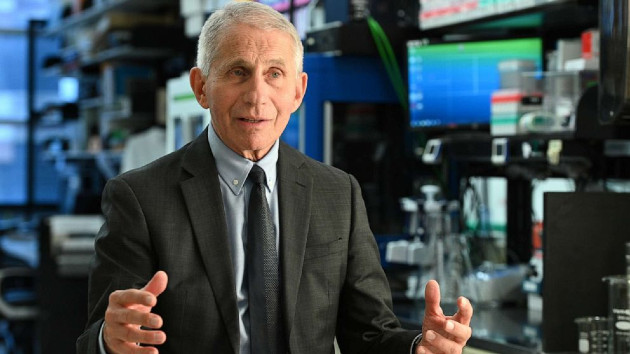 (NEW YORK) — After over 50 years working in public service, Dr. Anthony Fauci is stepping down at the end of the month, though he’s not retiring. Fauci told ABC News he wants to do something outside of federal work while he still has the health, vitality and drive to do so.

And as he gets ready to leave as the director of the National Institute of Allergy and Infectious Diseases and as President Joe Biden’s chief medical advisor, one of the things that worries him the most about the state of science and medicine in the U.S. is misinformation.

“Misinformation and disinformation is really hurting so many things, including people’s trust in science,” Fauci told ABC News Chief Medical Correspondent Jen Ashton at the NIH lab. “It becomes very difficult to get people to fully appreciate the truth of what’s going on — which will ultimately impact how we respond, in this case, to a pandemic, like COVID-19.”

Some of that misinformation directly centered around Fauci. Since the start of the COVID-19 pandemic, when officials first introduced mask mandates and stay-at-home guidelines, Fauci was a target for conservatives opposed to public health measures. He was falsely accused of wanting to “microchip” Americans with vaccines, of lying to Congress, and trying to amass political power.

Fauci faced threats starting in 2020, and health department leaders were worried enough about the risk that he got a beefed-up security detail.

“It’s preposterous, how someone who’s done nothing but encourage the population of this country and the world to abide by good public health practices — like getting vaccinated, and keeping up to date on your boosters, and to be careful, such as with indoor congregate settings — that person, i.e. me, all of a sudden becomes the object of vicious attacks,” he said.

Fauci said the most upsetting aspect is the threats to his family.

“What really bothers me is harassing my children and my wife. Give me a freaking break,” he said.

The COVID-19 vaccine is one of the major targets of disinformation, and Fauci was intimately involved in the process. The National Institutes of Health partnered with Moderna on developing an mRNA vaccine, despite the fact that there had never been an approved mRNA vaccine and that Moderna had never put a product on the market.

Fauci said there was some pushback within the government around that decision. But he was confident it was the right call.

“A lot of people, as you might imagine, were saying, ‘Well, why are you doing this? This has never been proven before,"” he said. “And yet, because of the confidence we had in the science, we went with it, and it turned out to be the right choice.”

COVID-19 vaccinations saved more than three million lives in the U.S., according to data released Tuesday from the Commonwealth Fund, a nonprofit that researches the healthcare system

There’s also been swirling misinformation in and around conversations about the origins of the coronavirus. Scientists may never have a clear-cut answer, and if they ever find one, it could take years, Fauci said. But right now, the data strongly suggests a natural origin for the virus, likely in a bat, he said.

Still, he said he has an open mind about the possibility the virus escaped from a lab — even though he thinks the preponderance of evidence so far suggests that’s not likely.

He said that one of the challenges of getting clear answers is the complexity of the relationship between American and Chinese scientists.

“The hostility and the accusatory nature of it, unless that changes dramatically, I don’t think we’re going to get the information that we need,” Fauci said.

Despite the backlash around public health officials’ actions at the start of the pandemic, Fauci said it’s hard to say if officials should have done anything differently.

“We were dealing with a moving target, where things were different from January, to February, to March, to April, to a year later,” he said. “To have a redo would be to have a magic wand and say from day one, we knew everything we needed to know about the virus.”

The misinformation and attacks aren’t why Fauci is leaving public service — he said he tries to just tune it out.

But the challenges around health misinformation aren’t going away. Twitter said last month that it would stop enforcing its COVID-19 misinformation policies, even as cases, hospitalizations and deaths from the disease in the United States climb.

That’s one reason why Fauci said he might consider joining social media. Without the pulpit of the federal government, he might need to find another way to communicate with the public.

Republican lawmakers have promised to call Fauci back on the record to defend the government’s response to the pandemic. Fauci, who has testified before Congress hundreds of times over the past decades, said he welcomes the opportunity.

“It’s a little bit dicey now because there’s such a degree of divisiveness that’s non-productive,” he said. “All of a sudden … it became normalized to just say things that were completely not true. I hope we get back to differences that are constructive, and part of the greatness of our country.”