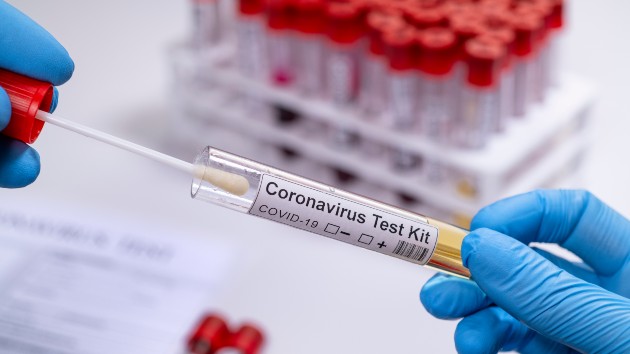 (NEW YORK) — As Americans start packing bars and live venues once again in the age of mass COVID-19 vaccination — with many abandoning masks and social distancing measures — a concerning reality check is taking place.

Health officials and front-line workers, particularly in pockets of the country with relatively low vaccination rates, are again warning the public that they are seeing an influx of unvaccinated patients who are becoming severely ill.

“This is the absolute worst that I’ve ever seen it,” Emily McMichael, a nurse at Mercy Hospital in Springfield, Missouri, told ABC News.

Nationally, more than 17,000 patients are currently receiving care around the country, the highest number in over a month, according to data from the Centers for Disease Control and Prevention.

The average number of new COVID-19 hospital admissions has also increased dramatically — to nearly 2,800 admissions a day — up by 35.8% in the last week.

And the distribution is fairly widespread: over a dozen states have seen significant increases in the number of patients coming into their hospitals in need of care, including Arkansas, which has seen a 76.4% increase in hospital admissions over the last two weeks, and Florida, with a nearly 90% increase.

Experts say the outlook for the country is mixed — while there won’t likely be a nationwide wave like spring 2020 or last winter, there is the possibility of regional surges in unvaccinated areas. And that spread can pose some dangers to the vaccinated population, specifically those who are vulnerable and in the possible creation of new variants that can mitigate or evade vaccines.

Although there are still significantly fewer patients receiving care than the peak in January, when 125,000 patients were hospitalized, experts warn the uptick is concerning, particularly as the delta variant continues to spread rapidly across the U.S.

Although it is still unknown whether the delta variant is more deadly than other variants, experts say it is more dangerous, given how quickly it spreads between people, thus, causing a greater number of infections, and therefore more illnesses and deaths overall.

This rapid spread has caused cases to increase in nearly every state in the country, according to data from Johns Hopkins University, with the national case average doubling in the last three weeks.

However, given the variation in vaccination levels from state to state and even community to community, its effects have varied widely.

“The impact of the more transmissible delta variant will not be felt in a uniform way across the country. Major pockets of unvaccinated people will continue to be the main hosts that will allow this virus to circulate,” said John Brownstein, Ph.D., the chief innovation officer at Boston Children’s Hospital and an ABC News contributor.

“While vaccines will likely prevent a major national wave, tens of millions of Americans with no prior immunity still remain susceptible to the delta variant,” he added.

“In unvaccinated communities where you have increased mobility and reduced mask use and social distancing, we will continue to witness surges and unfortunately unnecessary hospitalizations and deaths,” Brownstein said.

With nearly 90% of Americans 65 years and older vaccinated with at least one dose, young Americans appear to be driving this recent increase. According to CDC data, 18- to 24-year-olds currently have the nation’s highest new case rate, with only 41.6% of the age group fully vaccinated.

For now, experts say they do not foresee a nationwide surge.

“It’s likely that COVID-19 is now moving into a phase where it’s a regional problem and not a systemic problem for the country, because of the differential in vaccinations. Fully vaccinated areas are going to see a very blunted impact of delta,” said Dr. Amesh Adalja, senior scholar at Johns Hopkins Center for Health Security.

Dr. Angela Rasmussen, a virologist at the Georgetown Center for Global Health Science and Security, concurred, telling ABC News that “a surge in Missouri probably doesn’t mean much for states with high vaccination rates in terms of hospitalizations.”

However, large regional surges in areas of low vaccination could spark major problems for states with fewer health care resources, making the focus on hospital capacity urgent, the experts said.

But surges in under-vaccinated areas can pose a broader nationwide risk for those who are fully vaccinated but remain vulnerable.

“Uncontrolled transmission and population mobility means additional breakthrough infections in vulnerable populations, regardless of whether they happen to be in a state that has good vaccination coverage,” Brownstein said.

This is why some local health departments are again considering reinstating restrictions, in the hope of containing infections. On Tuesday, the Chicago Department of Public Health announced that unvaccinated travelers from Arkansas and Missouri, which have both recently experienced significant COVID-19 resurgences, will have to either quarantine for 10 days or present a negative COVID-19 test result.

In Los Angeles County, the nation’s largest, officials on Thursday reinstated a mandatory indoor mask mandate — regardless of vaccination status.

Brownstein also stressed the critical importance of containing the virus, because “unmitigated transmission further increases the probability that a variant with vaccine-evading properties might emerge.”

Although Rasmussen believes that it is unlikely that we will see the emergence of a variant that will fully evade vaccines, it is possible a new variant could reduce effectiveness enough to be problematic. In such a case, she said, boosters would become necessary.

Ultimately, said Adalja, “I think it has to be made very clear to people that the delta variant is a disease of the unvaccinated. The breakthrough infections that are occurring in vaccinated people are very, very rare, and not usually clinically significant.”