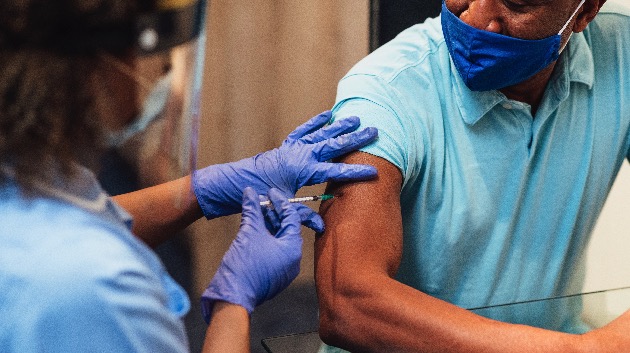 (NEW YORK) — While states like Missouri end a second month enduring a surge in COVID-19 cases as the more contagious delta variant spreads, public health officials across the country are hearing the same story from an increasing number of people getting the vaccine: someone they know recently caught the virus and the experience was unsettling.

“We don’t want to see more people getting sick as a driving force to get people vaccinated, but we know the case counts and more people in the hospital will play a role in that conversation,” Dr. Sam Page, St. Louis county executive, told ABC News.

Missouri has seen an increase of nearly 560% in new cases, 205% virus-related hospitalizations since early June — staggering increases, which have been exacerbated by the low number of residents — just over 41% — who are fully vaccinated.

“We really need higher vaccination penetration in our communities to slow this down,” Page said.

However, Missouri is one of the many states in the nation which has experienced a significant, newfound demand for COVID-19 vaccinations in the last several weeks. Vaccinations statewide increased by approximately 100% in the last two weeks of July.

While the uptick in shots has been most notable in the states that have been recently hardest hit by the coronavirus, the entire country is experiencing a rising vaccination rate.

According to an ABC News analysis of Centers for Disease Control and Prevention (CDC) data from the last three weeks, every state has reported an increase in its average number of first doses administered, with the national rate of Americans receiving their first dose up by more than 73%.

Similarly, in the last week alone, vaccination rates have increased by nearly 20% in young Americans, ages 12-17, and by more than 25% in adults.

There are many factors at play — fear of the delta variant, incentives from the government and the rising popularity of vaccine requirements for school or work — but regardless of why it’s happening, Page said the increase in vaccinations could not come soon enough.

“The delta variant is a whole new virus,” Page said.

Slowly but surely, officials have started to see their public urgings translate into shots in arms, data showed — a sobering silver lining to the immeasurable grief that has accompanied the virus.

But Page urged other states and counties to get ahead of the delta variant while they could, pulling out every stop to increase vaccination rates before the virus hits their community, because when it does, it’s too late.

The uptick in vaccinations in Missouri, for example, will only begin to give ample protection beginning around September, since full vaccination requires two shots and then about two weeks for the antibodies to kick in.

“We just wish that we could get people vaccinated sooner because the illness has an unfortunate loss of life associated with it. And that’s just a terrible thing to watch,” Page said.

In the final weeks of July, 14 states saw an increase of 100% or more in their first-dose average. All of those states have vaccination totals below the national baseline of eligible Americans who have had one at least shot — 67.6%.

The five states which have seen the most significant increases in their vaccination rates — Louisiana, Alabama, Mississippi, Arkansas and Oklahoma — are also among the states with the current highest seven-day case rates per capita. Louisiana, which currently has the nation’s highest case rate, has experienced a nearly 335% increase in individuals receiving their first vaccine dose. Similarly, Arkansas, which has the nation’s second highest case rate, has seen a 193% increase in recent weeks.

“This increase in vaccination rates in states that have been lagging is a positive trend. Americans are seeing the risk and impact of being unvaccinated and responding with action. And that’s what it’s going to take to get us out of this pandemic,” White House COVID-19 coordinator Jeff Zients said Monday at a briefing with reporters.

But experts caution that it will be critical for this trend to see even greater increases for the country to avoid more unnecessary hospitalizations and deaths.

“While the increasing caseload has had an impact on vaccine uptake, it has been minor, relative to the need,” Maureen Miller, professor of epidemiology at Columbia University’s Mailman School of Public Health, told ABC News.

“Since the delta variant is so much more contagious, we’ll need to see more people vaccinated to get this pandemic under control — in the range of 85%-90% of the population.”

The introduction of the delta variant, which now results in 8 out of 10 new cases in the U.S., has resulted in a rapid and significant increase in infections across the country.

The United States’ daily case average is now up to more than 72,400 cases a day, a 532% increase since mid-June. On Friday alone, the country recorded more than 100,000 new cases, marking the highest single-day report in nearly six months.

Nationally, as of Friday, nearly 40,000 patients were receiving hospital care across the country, up nearly 190% increase in the last month.

Several states with the lowest vaccination rates are now seeing viral surges equal to or higher than the peaks they experienced last winter and spring.

“The combination of the new, highly transmissible delta variant and the lack of both vaccination and implementing preventive behaviors, such as mask wearing and social distancing, have ensured that the unvaccinated will continue to become infected, hospitalized, and a needless amount will die,” Miller said.

In Louisiana — reporting the nation’s highest case rate — the average number of first doses administered has tripled over the last three weeks.

“My hope and my prayer today, is that that slope — that trajectory of increases in vaccinations — will continue for a long period of time. Because when that happens, you will see that case growth lines start to come down,” Louisiana Gov. John Bel Edwards said.

Edwards on Monday imposed an indoor mask mandate congruent with case numbers climbing and the CDC’s most recent mask guidance for everyone, including vaccinated people, to mask up if they’re in areas with a lot of transmission.

Health experts like Miller praised the increased restrictions, since mandating vaccines — considered to be the most effective way to reach herd immunity — isn’t currently an option.

“A current stumbling block to mandating vaccines is the (Food and Drug Administration) emergency use authorization status. Once the FDA provides full regulatory status, that will provide strong legal cover to institute mandatory vaccination,” said Miller.

But a piecemeal effort to mandate vaccines is underway, and quickly gaining momentum as the spread of the delta variant grows. The American Medical Association (AMA) and the American Nurses Association (ANA) joined up with over 50 other health care organizations to call for mandatory vaccinations within their industry last week, citing rising COVID cases and the delta variant as reasons.

“Due to the recent COVID-19 surge and the availability of safe and effective vaccines, our health care organizations and societies advocate that all health care and long-term care employers require their workers to receive the COVID-19 vaccine,” the organizations wrote in a joint statement.

And last week, the U.S. government announced that federal workers must receive the COVID-19 vaccine or contend with regular testing. The announcement came as a growing list of companies are requiring shots for employees, including Walmart, Google and Disney, ABC News’ parent company.

Vaccination is the “primary way” to move out of the pandemic, the AMA wrote, without having to revert to state lockdowns and additional mitigation measures.

“This surge was preventable. Unfortunately, it takes dying loved ones begging their family members to get vaccinated. Some people are starting to listen,” Miller said.