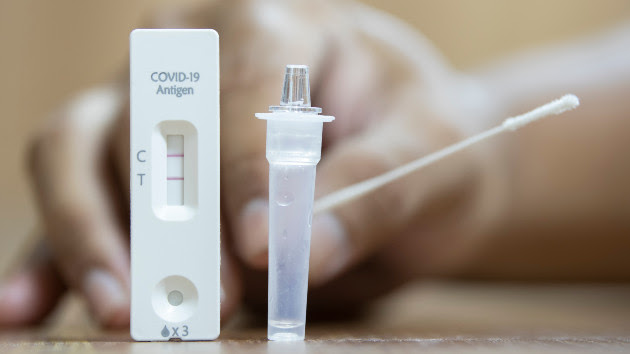 (NEW YORK) — Despite fears of a potential “tripledemic,” at least one of three viruses circulating in the United States seems to be trending downward.

Cases of respiratory syncytial virus, or RSV, appear to have peaked in mid-November and are now declining, according to data from the Centers for Disease Control and Prevention.

Because RSV appeared much earlier than usual in the season, filling up beds — particularly in pediatric hospitals — it seemed poised to continue.

But RSV is petering out while cases of the flu continue to increase, and COVID-19 infections rise after months of holding steady.

“What we have to remember is that, at some level, even if we have an earlier season, it doesn’t mean that it’s going to be a longer season,” said Dr. John Brownstein, chief innovation officer at Boston Children’s Hospital and an ABC News contributor. “Virus will spread but, once it runs out of susceptible hosts, at some point transmission is going to die down as part of that surge.”

Brownstein says RSV cases rose rapidly due to children not being exposed to the virus over the last two years due to lockdowns and those who were born during the pandemic.

However, so many have been infected that the virus is running out of people to infect, he said.

“So, it’s not surprising that we’re seeing a sort of a downturn,” Brownstein said. “Now, whether that downturn is permanent or we’ll see another surge this winter is still, I think, yet to be seen.”

Although some of the major impact of RSV might be over with, the same can’t be said for either flu or COVID-19.

Brownstein said neither of these is unexpected considering that cases have historically risen after Thanksgiving during the last two years of the pandemic, as people gather in crowded indoor spaces without mitigation measures.

Brownstein also theorized another reason for the surge in flu and COVID-19 while RSV decrease is what is known as viral interference, which occurs when one virus either prevents or reduces infection from another virus.

This means that while RSV was widely circulated, it may have helped stave off infection from other viruses.

“Now, we don’t know it for sure, but there is a theory that our immune systems are already so revved up from RSV, that doesn’t allow room for other viruses,” he said. “That shift in RSV downward, potentially, is giving room for other viruses to make more headway, and here we’re seeing the rise of flu and COVID taking place now.”

However, no matter which viruses are circulating, Brownstein said the message is still the same: for people to get vaccinated and boosted against flu and COVID-19 if they haven’t already.

As of Thursday, only 14.1% of Americans aged 5 and older have received an updated bivalent booster.

“We are only nine days out from Christmas right now,” he said. “We’re at people entering the holiday season. There’s still time to get that protection and that’s the single biggest thing people can do right now.”