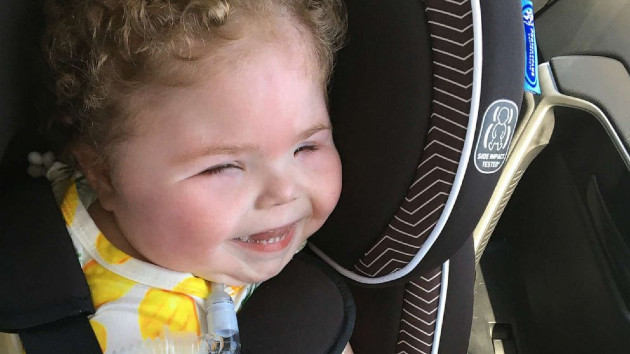 (SAN DIEGO) — A 2-year-old girl who spent the first two years of her life in the hospital is back home with her parents and younger brother in California.

It was a joyous homecoming for Addy Smith, who left the hospital on April 5 after 848 days of treatment at two different San Diego hospitals.

Addy was born via cesarean section on Dec. 10, 2019, at 27 weeks and four days at Sharp Mary Birch Hospital for Women & Newborns in San Diego, where she first received treatment. She was small for her age and according to her parents, was diagnosed with intrauterine growth restriction while still in the womb. IUGR, also known as fetal growth restriction or FGR, is a condition where a baby doesn’t grow at a normal rate in the womb and can lead to a lower weight at birth, according to the American Academy of Family Physicians.

Addy’s parents, Aliesha and Chris Smith, had struggled for seven years with infertility, and at one point were told they weren’t able to have children. They tried several intrauterine insemination procedures that were unsuccessful but then got pregnant one month before they were supposed to begin the in vitro fertilization process.

“We had tried so long. It was never ever on the table, never an option to not see things through with her and not give her a chance,” Chris Smith, 36, recalled to ABC News’ Good Morning America. “The OB (obstetrician) had told us, she just painted a picture of what it would be like for the next, at least couple years, and the rest of her life and we were really like, ‘OK, let’s go. Let’s saddle up and this is what was meant to be."”

At Sharp Mary Birch, Addy seemed to be making progress, despite her underdeveloped lungs, moving from a ventilator to a continuous positive airway pressure, or CPAP, machine to help her breathe. But three months after her birth, Addy took a turn for the worse, when she stopped breathing.

“The doctors did not think she was going to make it and we were getting ready to say our goodbyes,” Aliesha Smith, 35, recalled to GMA.

Doctors had to work on Addy for over an hour to resuscitate her, but the team at Sharp Mary Birch told Aliesha and Chris that in order to give Addy a fighting chance, she’d have to be transferred to Rady Children’s Hospital.

Addy was quickly admitted to Rady’s neonatal intensive care unit in March 2020, the same month when COVID-19 was declared a national emergency. Aliesha and Chris Smith also moved into a friend’s recreational vehicle so they could split up time with Addy after the hospital changed their protocols due to COVID-19 and only allowed one parent to stay at Addy’s bedside at a time.

Dr. Sandeep Khanna, a pediatric intensivist and the medical director of the pediatric intensive care unit at Rady Children’s Hospital, treated Addy, who had chronic lung disease and had trouble breathing on her own, for over a year in the PICU.

“The only thing which helped us through was that we had to give her a paralyzing medication after heavy sedation,” Khanna continued. “It was tricky because sometimes those episodes would resolve [after] maybe 30 minutes or an hour. But sometimes she would have periods of those episodes maybe 10 times a day and she would continue to have it for like seven to 10 days. And it was hard to wean her from heavy sedation and muscle relaxation medications. And that’s why she was stuck in the hospital.”

For months, Addy was on some form of paralytic drug, but the Smiths never gave up on Addy, even when her care team, like Khanna, didn’t have any clear answers or solutions.

“I was sitting with [Chris] in the room and I said, ‘Look, the way things are going, Chris, I don’t know when she will go home. I think this might take years. It might take decades, even,"” Khanna recalled. “We are not saying we’re quitting but I’m just telling you that you should be prepared for that. And he said, ‘Well, she’s driving the bus. Keep doing it.’ So we did it.”

“We were always on the same page,” Aliesha added. “We always knew what the end goal was, which was to get her home. And we always made an agreement, Addy is going to tell us when she’s not ready. And if we started questioning that and we would pray about it and say like, ‘God, please give me a sign, tell me if it’s time to stop or if it’s time to keep going."”

Khanna said there were many factors in Addy’s case but letting her grow in the PICU under the care of her nurses and medical team seemed to help with her breathing episodes, as her lungs continued to develop. Physical therapy also helped with her muscle rigidity and her lungs seemed to improve as her muscles strengthened. By February and March 2022, Addy didn’t have any bronchoconstriction, or muscle spasms in the lungs, when she couldn’t breathe.

The last two years have been extremely difficult for the Smiths but one of their bright spots was finding out they were expecting again. The couple welcomed their second child, a healthy baby boy named Aiden, last year.

Aiden was able to join his parents and accompany his older sister home two weeks ago and they’re getting to know each other already.

“She starts cracking up when he’s laughing or when he’s screaming. She cracks up and it’s funny to see them interact,” Aliesha said. “We’ve taken them on walks together out in the neighborhood, which has been so fun to do.”

Even though Addy still needs to use a ventilator at home for now, Aliesha and Chris are full of hope for their oldest child and want to pass along their hope to others.

“It’s been miracle after miracle with her,” Chris said. “We’re both so excited to see where she goes and what she can do. And I know she’s always going to continue to blow us away and surprise us.”

From patient to doctor: One woman’s resilient fight after six brain surgeries, stroke