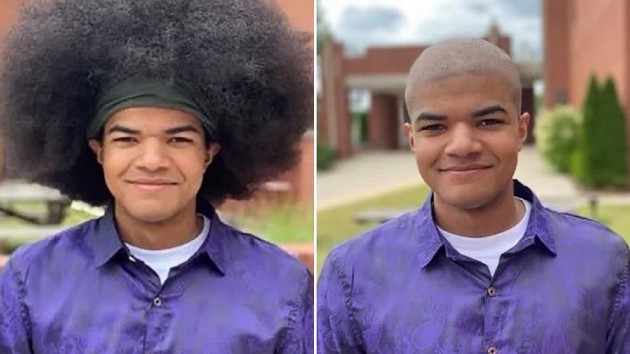 (NEW YORK) — One teen spent his Memorial Day weekend cutting all his hair off for a good cause.

Kieran Moïse, 17, from Alabama, is heading to the Air Force Academy in Colorado this fall. When he starts school, he’ll need to have all of his hair shaved off.

Instead of letting that hair go to waste, Moïse decided to donate it to a nonprofit called Children with Hair Loss. The organization provides free human hair replacements to children and young adults who’ve lost their hair due to medical reasons.

“When I knew it was going off anyways, I wanted to do something good with it,” Moïse told ABC News’ Good Morning America.

Moïse hadn’t had a real haircut in over six years and when he cut his hair on May 29, it was 19 inches long.

In 2019, Moïse attended a cancer fundraising event hosted in conjunction with the St. Baldrick’s Foundation. A number of people were going up and shaving their heads completely bald, which inspired him.

“It was this huge thing and I knew I wanted to be a part of that,” he said.

When limitations on in-person gatherings and events were put in place due to the COVID-19 pandemic, Moïse had to come up with his own way to help out.

Along with the physical hair donation, Moïse started a fundraiser through St. Jude’s Hospital called Kieran’s Curls for Cancer. His goal was to raise $1,000 per inch of hair for St. Jude’s, and at the time of publication, he has raised $25,865.

Moïse said the reasoning behind his choice to raise money for St. Jude’s — a leading children’s hospital known for treating cancer among other pediatric diseases — and donate his hair to Children with Hair Loss is personal.

“My friend Josh — things got bad and he passed away in December of our eighth-grade year,” Moïse said.

According to him, St. Jude’s helped his friend’s family out while Josh battled cancer.