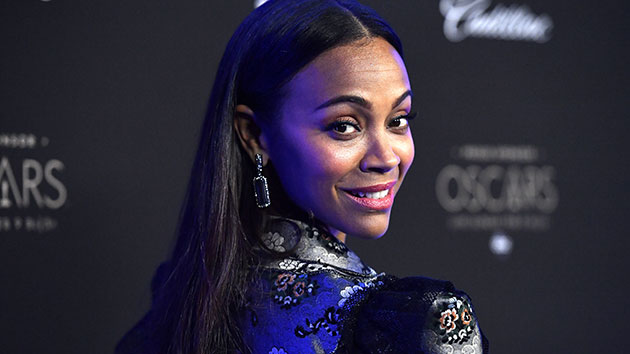 Zoe Saldana is gearing up to wear the green body paint once again as Guardians of the Galaxy: Volume 3 begins filming.  This will mark the fifth time Saldana has appeared as the assassin-turned-hero Gamora.

Taking to Instagram over the weekend, the 42-year-old actress shared a little-known tidbit about her beloved character… revealing that Gamora’s eyes weren’t originally brown.

“Would you believe that Gamora almost had green eyes?,” Saldana teased while sharing a throwback photo of the character’s early appearance — complete with green contact lenses.

“In one of the many camera tests we had [director James Gunn] wanted to see how I looked with green eyes as Gamora,” the Hollywood Walk of Famer revealed. “Eventually he changed his mind about that, and I was so grateful that he did because I found these contacts to be so uncomfortable.”

“My heart went out to [Dave Bautista] and [Karen Gillan] who had to wear contacts for Drax and Nebula. But they’re [sic] characters looked amazing in them, plus they’re true professionals,” Saldana praised before revealing why she felt compelled to take a walk down memory lane.

The Avatar star happily revealed, “Reminiscing a lot lately as we gear up to go back for another Guardians adventure!”

Saldana will still be playing Gamora in the third installment — but a different incarnation of the hero.  The version of Gamora fans came to know and love was murdered by Thanos in Avengers: Infinity War.  However, it a past iteration of Gamora was brought to present day in Avengers: Endgame and, eventually, go on to be featured in Guardians of the Galaxy: Volume 3.