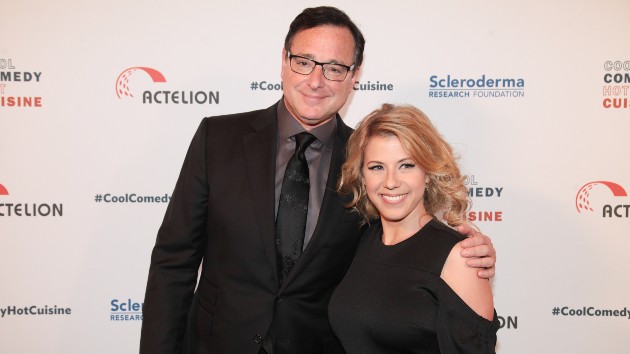 Following a flood of tributes from his famous friends over the weekend, the late Bob Saget‘s Full House co-stars Jodie Sweetin and Lori Loughlin, weighed in Monday.

The star was found dead Sunday in his Orlando, Florida hotel room. He was 65.

Loughlin, who played Aunt Becky on both the show and its spin-off, Fuller House, noted in a statement, “Words cannot begin to express how devastated I am. Bob was more than my friend, he was my family. I will miss his kind heart and quick wit.”

She added, “Thank you for a lifetime of wonderful memories and laughter. I love you Bobby.”

Sweetin, who played Stephanie Tanner, the daughter of Saget’s patriarch, Danny, posted a lengthy tribute to Instagram about her TV dad.

“There aren’t enough words to express what I’m feeling today,” she began, “Nor are they big enough to capture even a slice of who he was. One thing I do know, is that we never missed a chance to tell each other, ‘I love you.’ Every time we talked, there were at least 3 or 4 exchanged at the end of a conversation, whether it was text, phone call or in person. And he usually had to have the last word, ‘I love you more…’

Sweetin also recalled, “The hundreds of inside jokes we all had, the kind that only a family knows and that nobody else will ever understand or think is funny,” and, “He and Dave [Coulier] dancing together at my 13th Birthday party…”

Sweetin called Saget “a wonderful human being,” and a “genuinely kind spirit who made it through so much in his life, and was most happy when he was helping others.”

She added, “I would always say ‘you’re the best TV dad ever’. And he was.”