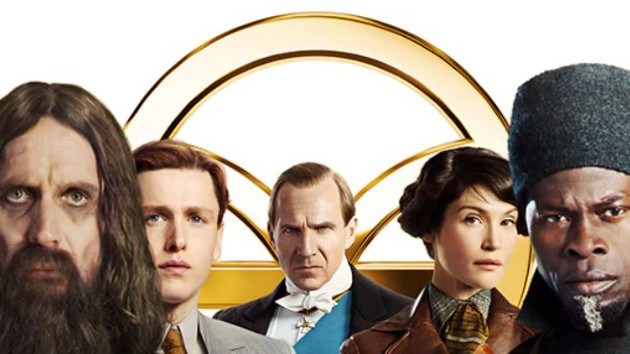 As previously reported, director and producer Matthew Vaughn fleshes out the early days of his gentlemanly spy agency as seen in the two modern day-set Kingsman films. In the original, Colin Firth‘s Harry Hart tells  trainee Eggsy, played by Taron Egerton, about the Kingsman spy agency’s start in the wake of World War I, when powerful men pooled their resources to create Kingsman to “preserve peace and protect life.”

Here we see one of those powerful men, Ralph Fiennes‘ Duke of Oxford, meeting with Rhys Ifans‘ Rasputin, trying to get an audience with Russian Czar Nicholas II.

“I only make decisions when my stomach is full or my b***s are empty,” the bearded menace declares.

“Well, thank goodness dinner is being served,” the Duke quips in response.

The Duke recruits his son, played by Harris Dickerson, as an agent to stop the coming global conflict, which seems to have been set in motion by a cabal of evildoers, Rasputin among them.

“While government waits for orders, our people take action,” The Duke tells his son. “You’re going to need a suit.”

The trailer also shows co-stars Djimon Hounsou and Jemma Arteton getting in on the action in a big way.

20th Century Studios is owned by Disney, the parent company of ABC News.