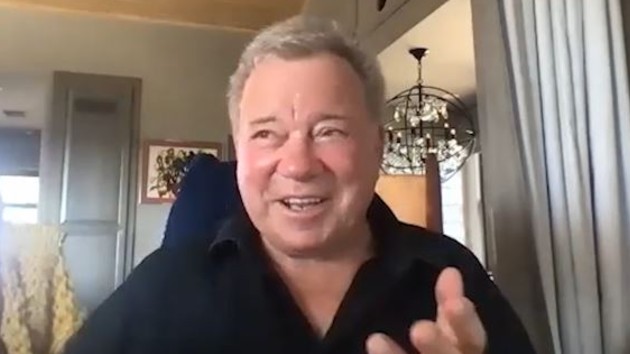 In the past year-plus, William Shatner has recorded a couple of albums, released a movie, served as host on a couple of new shows — including History’s The UneXplained and RT America’s I Don’t Understand — and has taken up a new hobby: slaying trolls.

The iconic Star Trek star admits to ABC Audio that, of course, he doesn’t have to spend time answering back snarkers online, but he genuinely gets a kick out of it.

There are countless examples, but his most recent comeback was reserved for Love It or List It co-host David Visentin, who posted to him, “Red rover red rover this tweet about life as theater calls @WilliamShatner over.”

To this, Shatner responded, “David, dear boy — a couple rules of Twitter: One doesn’t post a tweet of questions, then answer their own tweet and tag me in it so I can point out how pitifully sad they are,” complete with a shrugging emoji.

Visentin’s tweet was rather benign, but Shatner often gets sharper ones — and answers in kind. He recently took a Twitter user to task for calling Shatner’s singing Elton John‘s “Rocket Man” the “worst footage I had on my hard drive.”

To him, Shatner retorted, “I looked on my timeline for the dumbest person and found him! A blue checked troll who tagged me in silly tweet and then liked his own tweet! So I blocked him!”

Shatner tells ABC Audio with a giggle, “I find it amusing.”

He adds, “And of course, you know, the stupid people…who try to do stupid things behind an anonymous shield, you have to ignore. But if you take responsibility for your thought, and argue your thought, it could be great fun!”

‘The Crown’ reportedly casts William and Kate for season 6

Where one man has gone before: William Shatner documentary to preview at San Diego Comic-Con

William H. Macy talks ‘The Dropout’ ahead of its finale