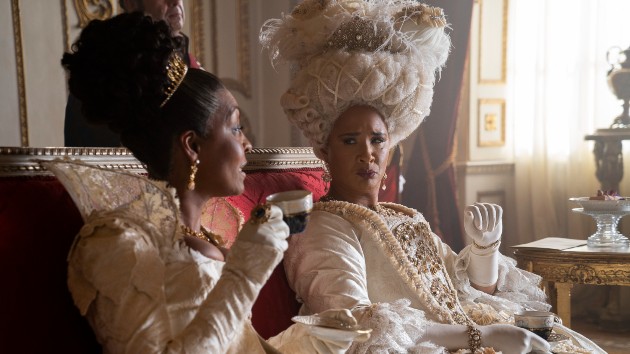 If you’re one of the millions of people who contributed to Bridgerton’s season one record-breaking viewership, you’ve most likely started, or even already finished, season two of the Netflix dramedy. And with the return of the hit Shondaland series, came the commencement of the show’s royal stars, including two of its leading ladies — Queen Charlotte and Lady Danbury.

Her majesty Charlotte, played by Golda Rosheuvel, and matchmaker Danbury, Adjoa Andoh, both spoke to ABC Audio about the joy they experience portraying the dignified women on-screen.

“To play a powerful woman who knows how to navigate and strategize the bear pit that would be the Regency Court of this period is fabulous,” Andoh said. “She gets to be manipulative, she gets to be loving, she gets to be hostile and welcoming, and she does it all with great style and elan…”

Rosheuvel expressed a similar sentiment about her character’s regal essence, detailing a vital aspect of the Queen’s fashion: her iconic wigs and luxurious ball gowns.

“It completely transformed the way I walk, the way I hold myself,” she said of her double-corseted undergarments. “The way you walk in those things is quite phenomenal. I quite like it. It’s quite choreographed for me. I like the way it kind of switches and stuff and the way my body moves.”

The powerhouse in each of the women shines through quite clearly in Bridgerton, but they’re also well aware of the overall cast impact. “The core of the show, it is a family…And we felt that in season one, filming it and coming back in season two, it was exactly the same,” Rosheuvel said.

Lucky for fans of the “Ton,” Queen Charlotte and Lady Danbury will continue their royal legacy in a new Netflix spin-off show.