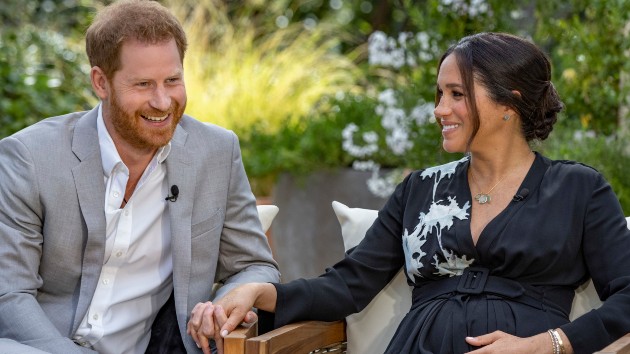 (LOS ANGELES) — A year after Prince Harry and Meghan Markle made their royal exit, they got candid about their experiences with the royals in an extensive interview with Oprah Winfrey that aired Sunday evening.

Here are some of the bombshells.

Meghan had suicidal thoughts: Meghan said she had “very clear and very scary” thoughts about suicide before deciding to step away from the royal family.

Harry and Prince Charles relationship: Harry said his father at one point “stopped taking my calls” after detailing his plans to leave the royal family. He added that he was “cut off” financially and has since been living off an inheritance from his late mother, Princess Diana.

Harry and Prince William relationship: “As I’ve said before, I love William to bits. He’s my brother. We’ve been through hell together,” Harry said. “I mean, we have a shared experience. But we’re on different paths. … The relationship is space, at the moment. And, you know, time heals all things, hopefully.”

Meghan and Kate Middleton feud rumors: Recalling a story that claimed Meghan made Kate cry, Meghan clarified, “The reverse of that happened.” “A few days before the wedding she was upset about flower girl dresses and it made me cry. It really hurt my feelings,” she explained, adding that Kate has since apologized.