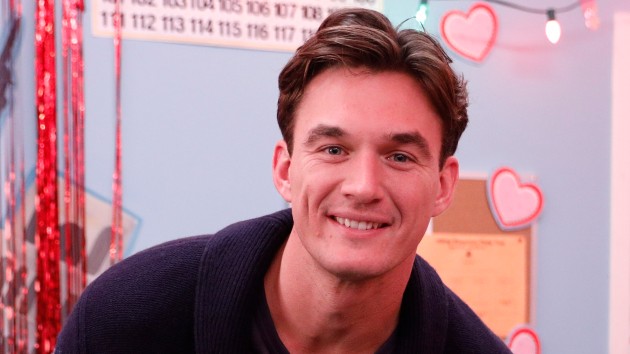 (LOS ANGELES) — Bachelor star Matt James narrowed down his list of potential suitors down to 10 on Monday — or did he?  One thing is for certain, though, the woman who goes on to win his heart is definitely a keeper.

That spoiler comes courtesy of Bachelorette alum Tyler Cameron, who is one of Matt’s close friends.

“Matt’s extremely happy,” he teased, but declined to name which lady wins Matt’s heart. “He seems like he’s in a great place and that’s all that matters.”

Tyler called upon Matt’s confession at the start of the season and dished to ET that, before his buddy stood before the camera to hand out roses, that Matt kissed “like two girls in the ten years I’ve known him.”

Tyler says The Bachelor has changed all that — and for the right reasons.

“The Bachelor pushes yourself more than you normally would push yourself in a relationship,” the 28-year-old model described. “I think you skip a lot of the BS steps in dating and get right to it. So I think as long as you’re willing to put yourself out there and be vulnerable and give it a shot, I think that it’s a possibility for sure.”

“Matt is a very self-motivated, hungry person and I think his whole, this last 10 years knowing him, he’s been trying to put himself in a better position,” he continued, noting that Matt feels he’s in a place professionally and financially that he can comfortably settle down and start a family.

But, as for who Matt rides off into the sunset with, Tyler says you just have to wait and see.