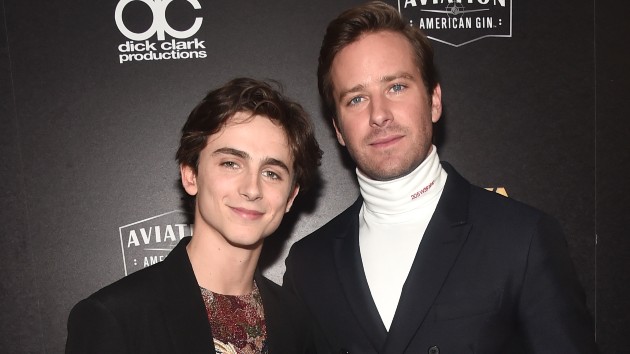 Chalamet and Hammer in 2018 -- Alberto E. Rodriguez/Getty Images for HFA

Chalamet, who played Hammer’s love interest in the Oscar-nominated 2018 film Call Me By Your Name, told the magazine, “I totally get why you’re asking that. But it’s a question worthy of a larger conversation, and I don’t want to give you a partial response.”

Hammer’s career came to a halt early this year after two women, including ex-girlfriend Paige Lorenze, came forward in January with serious accusations against him, claiming the actor harbored fantasies involving cannibalism. In addition, the 22-year-old claimed Hammer was “obsessed” with the idea of “taking a piece of me…and consuming it.”

Following her claims, a 24-year-old woman named Effie claimed The Lone Ranger star “violently” raped her for several hours on April 24, 2017, and that she believed he was going to kill her.

Hammer denied the accusations from both women and stepped down from two projects: Shotgun Wedding, starring Jennifer Lopez, and an upcoming series titled The Offer, about the making of The Godfather. The Cold War thriller Billion Dollar Spy also severed ties with the actor.

Hammer’s attorney denied the charges, noting, “From day one, Mr. Hammer has maintained that all of his interactions with [the accuser] — and every other sexual partner of his for that matter — have been completely consensual…and mutually participatory. [The accuser’s] attention seeking and ill-advised legal bid will only make it more difficult for real victims of sexual violence to get the justice they deserve.”

In June, Vanity Fair reported that Hammer had entered rehab to deal to “drug, alcohol, and sex issues.”