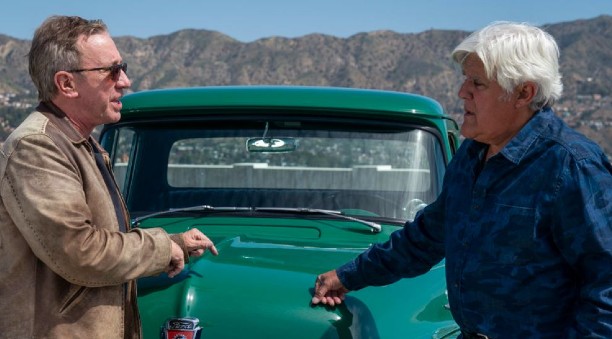 Jay Leno got a dose of laughter-as-medicine from his longtime pal Tim Allen as Jay recovers from burns he suffered in an accident last weekend.

TMZ caught a smiling Allen as he left the Grossman Burn Center in Los Angeles on Thursday, where the Toy Story star gave an update about his friend and Jay Leno’s Garage host’s condition. “Jay is good,” Allen commented as he walked to his car. “It’s wonderful because he’s feeling better. He’s feeling better, I brought him some car magazines, did some jokes, because that’s what we do.”

Leno suffered serious burns to his face, chest and hand after being sprayed by gasoline as he worked on an antique vehicle. He subsequently underwent a skin graft and is getting hyperbaric oxygen therapy to help him heal.

Allen continued, “His face looks good,” before joking, “it didn’t look all that good to begin with, so he’s going with ‘the George Clooney‘ look. You’re gonna be surprised.”

Leno’s doctors gave an update on Leno’s condition earlier this week, noting he’s expected to make a full recovery but explaining “it’s still way too early to tell” if he’ll have any permanent scarring from the accident.