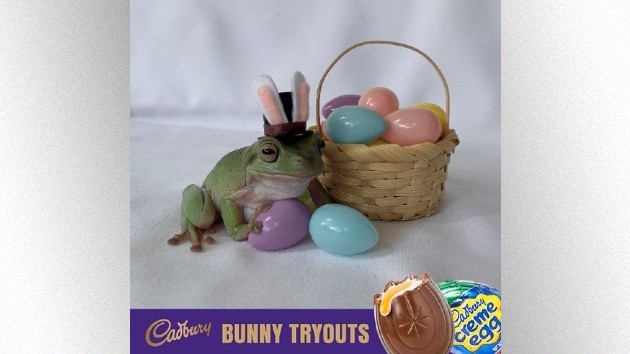 (FLORIDA) — Perhaps in a sign of the upside-down times, this year’s winner of the confectioner’s third-annual Cadbury Bunny Try-Outs is — a frog.

More specifically, Betty the Australian White Treefrog from Orlando, Florida has been chosen by voters to star in the annual Cadbury Clucking Bunny Commercial, which will air on TV later this spring.

It’s something of a shattering of the species glass ceiling, as Betty is the first amphibian — and the first female — to win the contest.  The company also donated $15,000 to the ASPCA in Betty’s honor.

This year also featured the most diverse assembly of finalists, Cadbury notes, with a goat, a miniature horse, and a llama vying for the TV spot and a $5,000 prize.

“When Betty learned about the opportunity to be this year’s Cadbury Bunny, she knew she had to try out,” says her owner in their submission video, which adorably has the frog wearing tiny bunny ears and capering around with plastic Easter eggs.  “Betty knows what it’s like to be different, and she’d like the chance to show everyone that our differences are what make us what we are, and they’re something to be proud of.”

Last year’s winner, the beagle Lieutenant Dan, was apparently among the judges.

Speaking of Cadbury, they just launched Cadbury Creme Egg Beer, just in time for Easter, in a partnership with Goose Island Brewery.