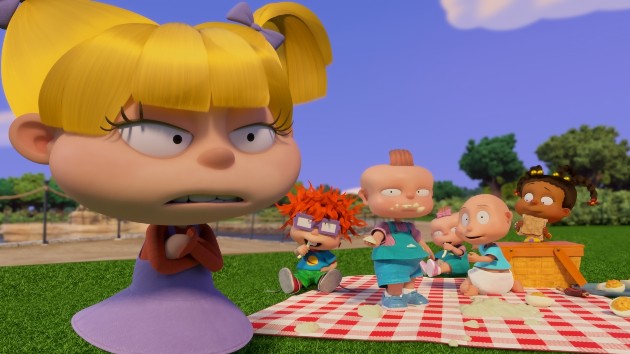 The beloved ’90s Nickelodeon cartoon Rugrats is back, in a new CG-animated form, debuting today on the streaming service Paramount+.

The original series launched in August of 1991, and instantly became a pop culture phenomenon. It ran for 13 years on Nickelodeon, earning four Daytime Emmy Awards and even its own star on the Hollywood Walk of Fame.

E.J. Daily, veteran of live action movies like Pee-Wee’s Big Adventure and animated shows like The Powerpuff Girls, reprises her Rugrats role as smart-aleck baby Tommy Pickles in the new series. She tells ABC Audio she was surprised when her millennial daughters’ “too cool for school” boyfriends recently outed themselves as serious Rugrats fans.

“The boys asked where [my daughters] were going, and they said, ‘We’re going to the premiere with our mom,’ and the boys are like, ‘Could I go?”’ Daly recalls with a laugh, adding, “[A]ll the merchandise and t-shirts and hats, if you go online, all the Millennials are wearing Rugrat everything.”

She adds, “I feel like there couldn’t be a better time for the show to come out.”

Cheryl Chase, who reprises her Rugrats: All Grown Up role as Tommy’s bossy older sister, Angelica Pickles, has lent her voice to projects like Hayao Miyasaki‘s acclaimed My Neighbor Totoro, and live-action films like Addams Family Values.  She explains of the new series, “I think it’s amazing that we get to bring to life this beloved cartoon show…and now we’re bringing it back for a whole new generation. The children that were raised on it, they’re grown up with their own children.”

Chase promises the new show will be, “a miraculous, amazing, stupendous experience for everybody that loves the Rugrats.”