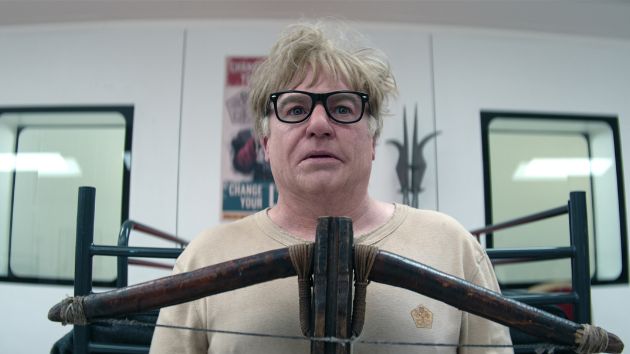 There’s a whole lot of Mike Myers in the new Netflix comedy series The Pentaverate, which debuts Thursday. It’s about a secret society that has been controlling the world for centuries. So as a powerful man in media, is Myers himself part of a real-life secret society?

“Well, I can neither confirm nor deny the existence or nonexistence of any secret society that I am or not in,” Myers tells ABC Audio, adding, “I’ve been obsessed with secret societies my whole life. My mom was in the Royal Air Force and had a top security clearance, so I knew that there were secrets in the world.”

Myers plays eight characters in The Pentaverate, the most he’s ever done in one project. While that sounds exhausting, he says it’s more of a release for him.

“I always have characters in me that are kind of circling the airport and looking for a place to land,” he shares. “I love performing…and I love playing characters. And that has its own energy that gets you going.”

In The Pentaverate, instead of being evil or power hungry, the secret society’s five leaders are known for being nice. Myers says the show comes during an interesting time in comedy and “it’s good that people are being conscious of not saying things that marginalize, disempower or ridicule.”

Myers himself is known for his trademark brand of humor that is often silly but never mean, which he uses to uncover truths.

“The truth shall set you free, but at first it’s going to upset you…And it’s important that the truth be told,” Myers expresses. “Now I love speaking the truth faster with kindness, but that’s just me.”