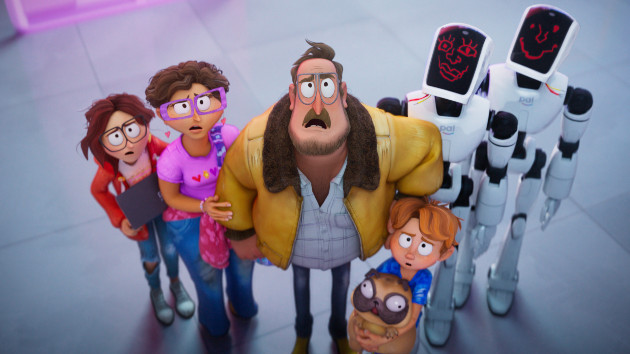 Maya Rudolph says she brought plenty of her “mom energy” to the character of Linda Mitchell in the animated Netflix sci-fi comedy, The Mitchells vs. the Machines.

“I like that I’m the matriarch,” Rudolph tells ABC Audio. “I did bring some mom energy. Some like, ‘What would you crush with your bare hands to save your family energy.’ And the energy of being a family member and sometimes having to lift up the others, or bring people together… to show that things can still work out and things are going to be OK.”

“It’s hard work,” she continues. “And it’s definitely something that… no one prepares you for until you’re in the thick of it.”

That hard work pays off for Rudolph who demonstrates that she’s a fierce mother in the action-packed family film that centers on a robot uprising.

“Katie’s in this sort of insecure moment where she’s really searching for her people, a place where she feels like she fits in,” Jacobson says. “That moment when you leave home for the first time. I relate to that so much.”

Meanwhile, Beck Bennett says his connection to his role of Eric — a damaged PAL Labs robot — came from admiring his character’s “inquisitive” qualities.

“When [the robots] change.. and are asking a lot of questions, I wish that was something I did more,” he says. “I think sometimes I’m a little too like, ‘Oh, yeah, I got this. I know what’s going on. I think I get it.’ So, if I could take something from the robots, it would be asking more questions to really get an understanding of things.”

The Mitchells vs. the Machines premieres on Netflix Friday.