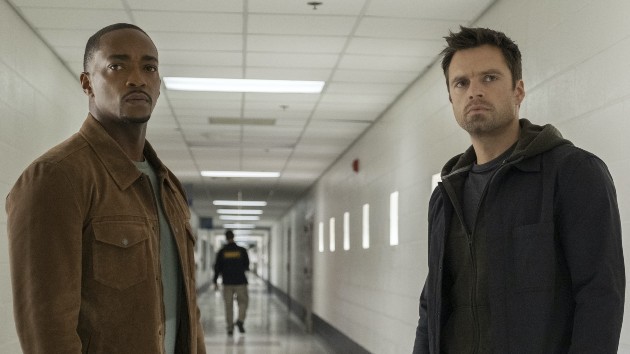 (NEW YORK) — As a huge Marvel fan, being the head writer on The Falcon and The Winter Soldier was a dream come true for Malcolm Spellman. But to have the project center on Marvel movie frenemies — but real life buddies — Anthony Mackie and Sebastian Stan made it all the more sweet.

The pair’s characters, Mackie’s Sam Wilson and Stan’s Bucky Barnes — the latter the formerly brainwashed assassin The Winter Soldier — were both friends of Captain America’s Steve Rogers in the MCU, and their competition over that led to some huge laughs onscreen in Captain America: Civil War.

In the Disney+ series, Mackie and Stan’s chemistry shines again, and for Spellman, it was easy to capture that magic.

“Everybody knows that moment in Civil War: ‘Can you move your seat up?’ ‘No.” Spellman recites. “It is crazy that in 14 seconds the entire planet Earth knew they could carry a movie or a series.”

He enthuses, “Literally, for us, it was the same thing, whatever it is that those two guys have: it was a cheat code, you know, what I’m saying? Because you could spend 42 million dollars on a set piece or you could put those two [characters] in therapy together and it’s going to be just as valuable.”

See for yourself when Marvel Studios’ The Falcon and The Winter Soldier debuts on Disney+ Friday.