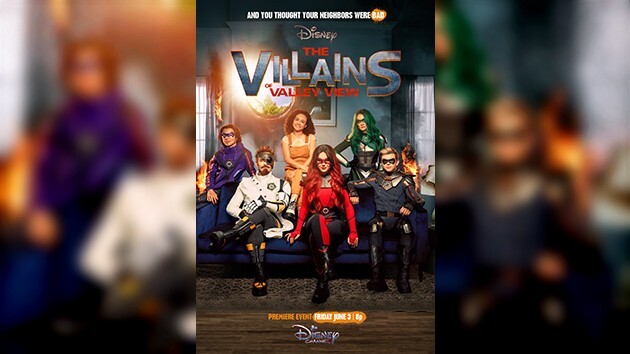 Imagine the family that moved in next door to you was actually a bunch of famous evildoers in disguise. That’s the premise of Disney Channel’s new offering The Villains of Valley View, and the cast explained what makes their show so relatable.

“It’s about a family of supervillains! What’s not to love about that?” Malachi Barton, who plays Flashform, asked ABC Audio. He thinks the show is relatable because it celebrates “a family being their unique selves while they’re having to learn how to work together.”

Reed Horstmann, who plays the villain Chaos, added the sitcom has “a lot of heart” because it’s about a family of once-powerful supervillains “finding their own self-confidence” after being “forced to adapt” to life on the run.

The family is forced to go into hiding after Havoc, played by Isabella Pappas, angers the League of Villains. The supervillains change their identities to the Madden family and move to a sleepy suburb in Texas.

Pappas said the show is not just about villains, it shares important life lessons. “It’s about taking control of your life and not letting people walk all over you,” she said, adding that’s an important message for young kids.

Kayden Muller-Janssen plays Hartley, the Maddens’ ultra-nice neighbor. She’s happy to see a show that sympathizes with villains instead of the “perfect” heroes. She said villains are allowed to have flaws, which makes them “really relatable” because “everybody makes mistakes. That’s a part of being human.”‘

British comedian Lucy Davis stars as the top-ranked villain Surge, the family’s matriarch, and found her “strong and confident” character very surprising. Teasing a midseason arc, she dished, “You almost wouldn’t have expected her to have insecurities.”

The Villains of Valley View premieres June 3 on Disney Channel.