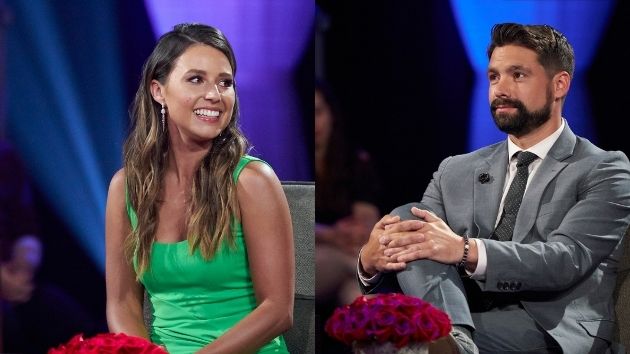 The Bachelorette continued Monday with a special “Men Tell All” episode that started with a heartbreaking Facetime call between Michael A. and his young son, which brought him to tears.  Following their discussion, Michael withdrew from the competition.

As revealed previously, Michael, 36, is a widower who lost his wife Laura to breast cancer in 2019, three years after the birth of their son, James.  Michael repeatedly stressed the importance of his son throughout the competition and to Katie.

James said to Michael during the emotional call, “Maybe daddy left because he don’t want to see me.”

Michael said his son’s words left him “at war” with himself, which led to an emotional conversation with Katie.  In the end, Michael chose to go home to his son and explained, “With hometown coming up, I feel like it’s wrong for me to give you half of what I could be.”

“You’re a good dad,” Katie tearfully replied, adding, “As selfish as I want to be and I want to beg you to stay, I just know it’s not an option.”

Still, while supporting Michael’s decision, Katie mourned what could have been.

“All I’m looking for is to be in love and my person — and it’s very possible my person has left,” she said afterwards, addressing the camera.

During the “Men Tell All” portion of the episode, Michael described his situation to hosts Tayshia Adams and Kaitlyn Bristowe as “a juggling act all single parents try to keep together, which is taking care of someone that they truly love while simultaneously trying to find happiness for themself.”

Added Michael, “When you pursue one, you feel as though it takes away from [the other].”

Michael insisted he had no regrets for choosing his son over Katie.  However, he admitted he would “100%” give their romance another shot, if that’s what she wanted.

Katie responded by saying that she was ready to move on, adding that she had “nothing but love and respect for Michael.”

The Bachelorette returns Monday at 8 p.m. ET on ABC.