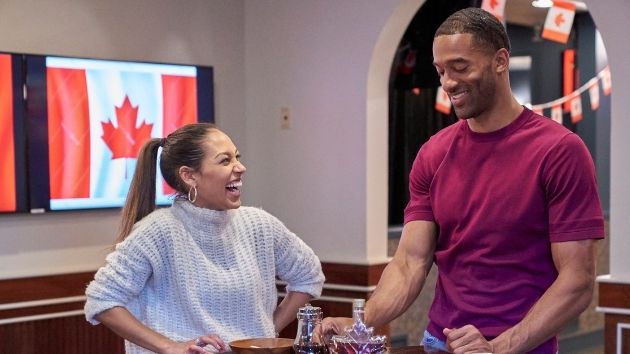 (LOS ANGELES) — It was time for Matt to meet the families on Monday’s episode of The Bachelor, which led to some painful moments — emotionally and physically.

Due to the COVID-19 pandemic and subsequent travel restrictions, Matt and his final four didn’t leave the resort, but their loved ones had safely arrived and were ready to have some serious conversations with the man who could become a part of their families.

First up was Minnesota school teacher Michelle, who started their date with a relaxing bike ride, after which her students, appearing via Zoom, had some tough questions for the two.

One by one, the students “grilled” Matt about whether he and Michelle had kissed yet, how many girlfriends he had and if they were going to have children.

Then, it was off to meet Michelle’s mom and dad, who learned that Michelle was in love with Matt and, despite Matt’s reluctance to fully reciprocate her feelings, promised to respect Michelle’s decision regardless.

The second hometown date went to Rachael, who dared him to join her as she tried skydiving for the first time. The two, escorted by experienced skydivers, plunged 12,000 feet into a field. Ironically, it was Rachael who ended up regretting the decision after being left with a few bruises after a rough landing.  Thankfully, she suffered no serious injuries.

Later, the Georgia native introduced Matt to her mom, dad and sister Trinity, whose main concern was that Rachael was jumping into the relationship too quickly.  They ultimately agreed to support her decision.  However, after Matt left, Rachael, addressing the camera, expressed disappointment that, despite assuring her dad that he was in love with her, Matt was unwilling to take the next step and ask for her father’s blessing.

Bri, whose earlier one-on-one date with Matt ended up with her getting thrown from a four-wheeler, offered a little “payback,” by taking him for a thrilling (and sometimes scary) off-road adventure.

Matt then met Bri’s mother, baby sister and best friend, whose name also happened to be Bri.  The San Francisco native’s’ mom pulled no punches, asking point blank if he was in love with her daughter.  When Matt answered that he “falling for” Bri, her mother framed the question a different way.  “So, you see Bri in your life?” she asked. When Matt replied with an emphatic “absolutely,” Bri’s mom appeared skeptical and replied with a simple, “Interesting.”

Bri’s admission that she’s scared to open up to Matt about her feelings for him certainly didn’t assuage her mother’s doubts, but she ultimately advised Bri to follow her heart.

“Worse case scenario, we are mending a broken heart together,” she assured Bri.

Bri followed her mother’s advice and told Matt she was falling in love with him and wanted more time with him.

The final hometown date went to Serena, who gave him a taste of her native Toronto, Canada, which included a little ice hockey.  She also introduced him to some the local cuisine and a primer on some Canadian lingo.

Matt later met Serena’s mom, dad and sister Talia, who, while conceding that he was “a nice guy,” sensed that Serena didn’t seem “smitten” with Matt and was talking herself into a relationship with him.

Serena’s conversations with her family convinced her that she wasn’t ready for a serious commitment, and addressed the camera afterwards that the date failed to bring her the clarity she’d sought.  Serena eventually made the difficult decision to walk away from the competition.

That set the stage for fantasy suites, but not before Matt made it official by asking Bri, Rachael and Michelle to accept his rose, which they all did.

Here are the women going to fantasy suites: