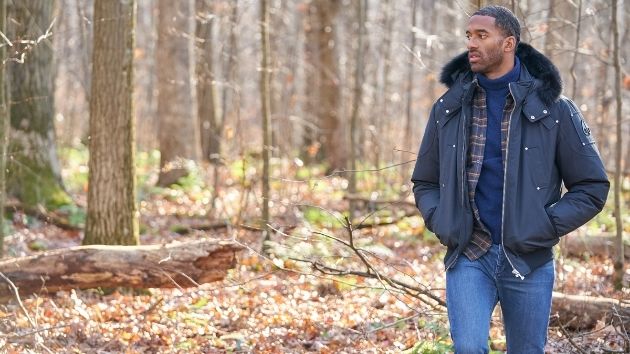 (LOS ANGELES) — It was time for fantasy suites on Monday’s episode of The Bachelor, with Matt going on one-on-one dates with the three remaining women, before facing the big question — were they ready to spend the night together?

Before Matt could move forward though, he needed to address a longstanding rift between him and his father, whose infidelity led to the breakup of his parents’ marriage.  Matt said the lack of a father figure in his life ultimately affected his own relationships.  Following an emotional and brutally honest conversation, Matt found some needed closure and was confident that he would not make the same mistakes as his dad.

The first date went to Michelle, who joined Matt for a “traditional Pennsylvania Dutch spa” date, which involved a foot soak in oatmeal and a rubdown with butter, followed by a milk bath and a serious conversation about Michelle’s formula for a lasting relationship.

At dinner, it was Matt’s turn to open up about his fears and hopes for the future, after which Michelle assured him that even though he didn’t experience the stable family life that she had, Matt still brought “just as much to the table,” and she looked at him as “her person.”

Michelle accepted his invitation to explore their relationship even further with a night in the fantasy suite. Interestingly, after telling Matt more than once that she was in love with him, the strongest response he could muster was, “Thanks for sharing that.”

Next it was Bri’s turn to see if Matt was ready to take their relationship to the next level.  The date began with a hike in the woods, a true test of their compatibility since Bri is not exactly an outdoor person. Lucky for her, as Matt confessed — out of earshot to Bri — neither was he.

Bri, in a private interview, revealed her hope that the night would end with a proposal, and made sure that Matt knew exactly how prepared she was to spend the rest of her life with him.

Bri described her overnight with Matt in the fantasy suite as possibly “life-changing” and that she “got to know really intimate parts about him.”  Matt, for his part, said privately that he could see a life with Bri… but he still had some tough decisions to make.

Needless to say, all three women were uncomfortable that Matt would be spending an entire night alone and sharing intimate conversations with their competition, particularly Rachael, who was “sick to her stomach” that she could possibly lose him to another finalist.

Her date with Matt started with a ceramics lesson, but her mind was only on Matt, and if his feelings for her had changed after his other overnights.  She interrupted the lesson to “get answers” from him, rather than “wait around for the heartbreak.”

He reiterated his earlier assertion from a previous date that he was, indeed, “falling in love” with Rachael and she reciprocated his feelings.

Their night in the fantasy suite started off with a fireworks display. The next time we would see them was at the final rose ceremony.

When the moment arrived, Bachelor Nation learned that Michelle and Rachael would move on to meet Matt’s family and a possible engagement, while Bri’s long journey would end with a tearful goodbye.