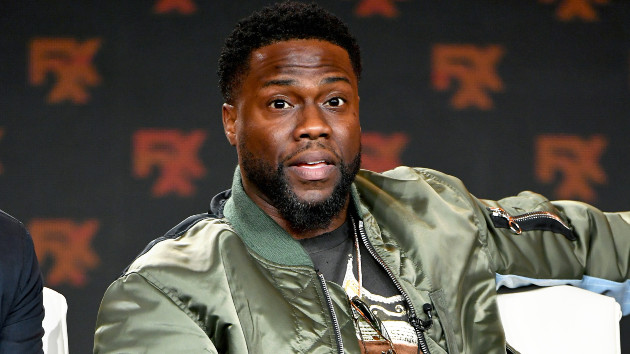 Some things are just better left unsaid. Unfortunately for Kevin Hart, he learned this the hard way.

In a now viral clip from Hart’s new talk show Hart to Heart, the 42-year-old comedian is joined by Don Cheadle. During their discussion, Cheadle briefly mentions his age, which causes Hart to loudly react in a way that catches both stars off-guard — giving way to a cringeworthy exchange.

The two stars briefly stare at each other in silence as Cheadle shoots Hart a look, leading the Fatherhood star to apologize.

“Sorry,” he says as the clip comes to a close.

Although the exchange was interpreted by most as awkward and tense, there seems to be no bad blood between the two.

Hart showed that he was able to laugh at his pain by retweeting the clip along with the caption, “Y’all gotta check out this interview in full,” followed by four crying laughing emojis.

It’s appears Cheadle didn’t take the situation too seriously, either. When a fan asked what was going through his mind in that moment, the Avengers: Endgame star answered, “That @KevinHart4real and i need to do a movie together asap!”

“I think this is my favorite interview ever,” he added. “‘damn!"”