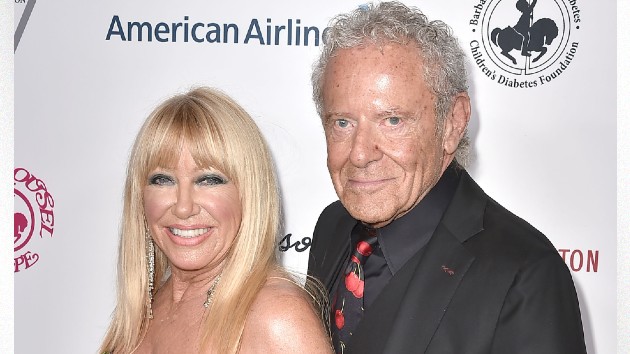 (LOS ANGELES) — Suzanne Somers remained absolutely calm when a man slipped onto her property over the weekend and confronted her — all while she was hosting a livestream.

The Three’s Company star was chatting on Facebook live over the weekend alongside husband Alan Hamel when she noticed something was amiss.

Somers was teaching her followers how to contour when she heard something off camera and asked her husband, “Is somebody here?”

Hamel tries to assure his wife she only heard a frog, but the actress was adamant that she “heard a person.”

Somers then called over in the direction she heard the talking, asking if someone was “here” and the intruder, who police say was near-naked, approached.

The man, who identified himself as Aaron Carpenter, claimed he was “terrified” of something and tells the Ageless author, “I’m not even sure…there were ghosts following me.”

The intruder also told a rather calm Somers that a friend led him “up this hill” and came “down” into her property.  The man also assured the actress that he was “not a scary person whatsoever.”

While Somers tells her intruder that he “doesn’t scare me” and that he “seemed like a nice person,” she politely insists he leave her residence and even offers to have her husband show him the door.

Hamel and Somers insist the intruder leave, who then claimed in response, “I brought a gift.”

With a smile, the actress rejects the offer, saying she “doesn’t want anything” and remains firm that the man is trespassing.  Eventually, she offered to have one of her assistants escort the intruder off the property.

After Somers verified that the man was gone, she calmly continued her video.

According to Deadline, police caught up with the intruder and reprimanded him — but did not issue a citation.

The King reigns at the box office: ‘Elvis’ edged out ‘Top Gun: Maverick’ after all