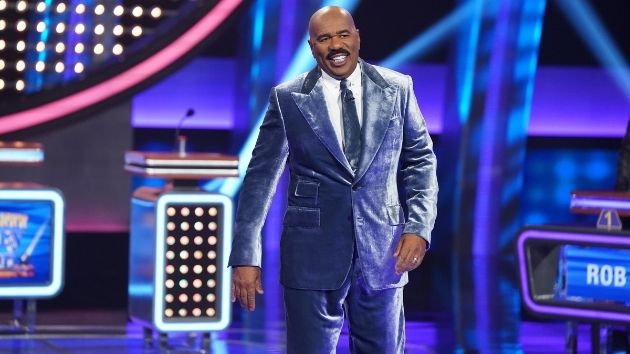 It’s almost time to play the Feud! Celebrity Family Feud returns Sunday night on ABC for a new season, with host Steve Harvey back again asking the questions and making everyone laugh. But, who makes him laugh?

“Anthony Anderson‘s mother has always been a favorite, but I’ve known her for years,” Harvey told ABC Audio when asked about one of his all-time favorite contestants. “Anthony Anderson’s mother does not pull punches, man, she don’t hold back.”

Harvey also spilled on his favorite types of celebrities to have on the show — naming athletes and musicians.

“Comedians… you never know what you’re going to get. So, hang on, you know,” he added.

Harvey, who held down hosting duties since 2015, also shared which families he would have loved to see go head-to-head on his show.

“I would have loved to have the Jacksons on one side and the Osmonds on the other side, because when I was growing up it was it was the Osmonds against the Jackson Five,” he explained. “They were making Donny Osmond go against Michael Jackson. It was the craziest thing man.”

As for which families the audience will see go head-to-head this weekend?  Kicking off the new season will be the family of Rob Lowe versus the family of Terrence Howard.