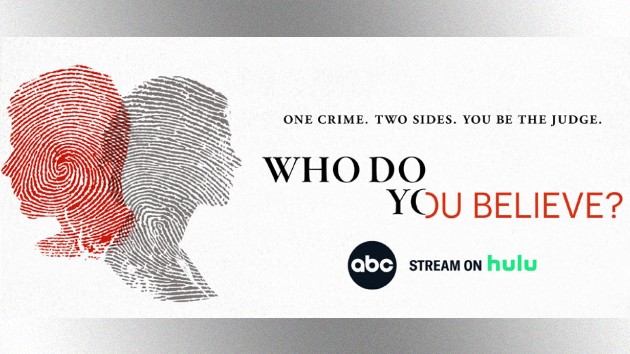 “In order to find the actual truth, you need to hear all sides. And when it comes to crime, too often the sides of, you know, you don’t really get the full picture,” executive producer Ben Crompton explains to ABC Audio. “Because everyone’s truth is different.”

He adds, “What we set out to do is to speak to people who were close to a really twisty, turny, true-crime story on either side of it. And what we found is their stories, their truth is often directly incongruent to the other person’s truth.”

Executive producer Alex Weresow says Who Do You Believe? is different than other true-crime shows. “Yes, there are some murders, but the range of stories are pretty different, too,” he notes. “We have a conservatorship battle…You know, it’s mothers versus daughters, sons versus mothers…They’re not all bloody, gory murder.”

Since the show deals with court cases, ABC Audio asked Weresow about the fascination over coverage of Johnny Depp‘s lawsuit against Amber Heard.

“[Y]ou get to see her reaction to him on trial as he’s [testifying],” Weresow points out. “And that’s exactly what we’re doing in our show, utilizing split screen and kind of putting them in the same rooms. You can watch this person as that person is making the accusations against them, and they have the right to rebut everything as well.”

He adds, “So it is very much just like that, that trial. But hearing Amber being able to respond right away instead of having to bite her tongue.”