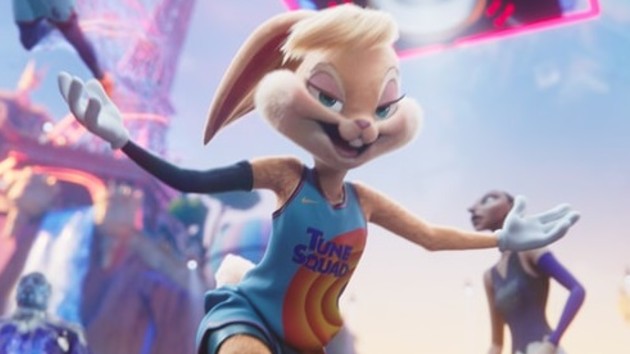 Space Jam: A New Legacy, the follow-up to Warner Bros. 1996 live action-CGI feature Space Jam, pulled off a major upset over the weekend, stealing first place from Black Widow at the box office with an estimated $31.7 million weekend — $10 million more than projected.  It marked the biggest opening for a kids-targeted film since the COVID-19 pandemic began.

Marvel’s Black Widow, meanwhile, fell to second place with an estimated $26.5 million — a sharp drop from its record-breaking $80 million debut a week ago.  So far, the film has delivered $132 million stateside and $100.7 million overseas for a worldwide total of $232.7 million.  Black Widow is also available on Disney+ for a $30 surcharge.

Escape Room: Tournament of Champions, the sequel to the 2019 thriller Escape Room, pulled in an estimated $8.8 million domestically in its opening weekend.

Fourth place belongs to F9: The Fast Saga, which earned $7.6 million in its fourth weekend in U.S, theaters. Its U.S. total now stands at $154.8 million.  Internationally, where it debuted earlier than it did in the U.S., F9 has racked up $436.4 million — bringing its worldwide gross to $591.3 million.

Rounding out the top five is The Boss Baby: Family Business, the animated follow-up to 2017’s The Boss Baby, which delivered an estimated $4.7 million in its third week of release.

Elsewhere, Roadrunner: A Film About Anthony Bourdain, a documentary about the life and death of the chef and travel show host, who died by suicide in 2018, debuted in eighth place with an estimated $1.9 million — the best opening for an independent film in 2021.

Pig, the thriller starring Nicolas Cage, premiered to an estimated $945,000 from 552 theaters.