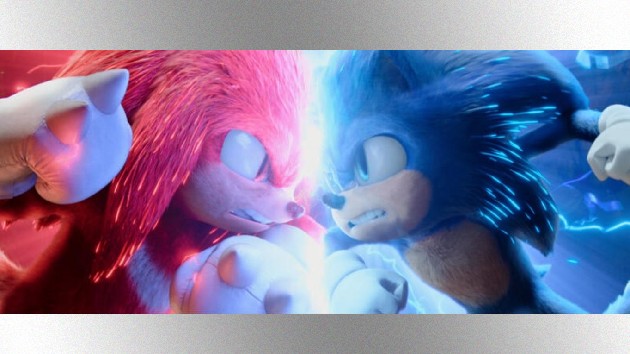 © 2022 Paramount Pictures and Sega of America, Inc. All Rights Reserved.

Sonic the Hedgehog 2, the live action-CGI animated sequel to 2020’s Sonic the Hedgehog, opened in first place at the box office with an estimated $71 million — a bigger three-day debut than its predecessor and a new record opening for a video game adaptation.

Overseas, where the film starring Jim Carrey, James Marsden and Ben Schwartz as the voice of its titular character, opened a week earlier in some markets, it pulled in an estimated $70 million so far, bringing its current worldwide tally to $141 million.

The Channing Tatum/Sandra Bullock rom-com The Lost City took in an estimated $9.2 million in its third week of release. The film, which has only opened in a few foreign markets, has taken in $9.7 million to date, bringing its three-week worldwide tally to $78.6 million.

The Jake Gyllenhaal-led thriller Ambulance disappointed with an estimated $8.7 million, good for just fourth place. The film, from director Michael Bay, did slightly better overseas, where it delivered an estimated $22.5 million, bringing its worldwide box office total to $3.2 million.

Rounding out the top five was The Batman, grabbing a little under $6.6 million. The film has raked in $359.1 million in North America after six weeks and $376.1 million overseas, bringing its global tally to $735.2 million.