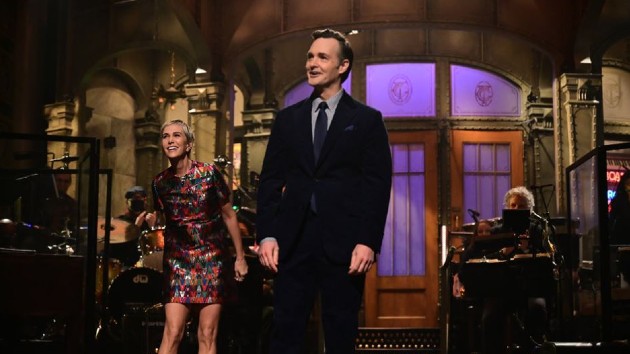 Former Saturday Night Live cast member Will Forte finally got his shot at hosting the long-running sketch comedy show, only to be upstaged by former cast mate Kristin Wiig.

After bemoaning that Wiig and fellow SNL alums Bill Hader, Andy Samberg, Jason Sudeikis and Fred Armisen — and even Seth Meyers and John Mulaney — all hosted the show at least once before he got the call, the MacGruber star joked that they “saved the best for last.”

Before he could savor his “time to shine,” Wiig appeared on stage, leading to a feigned argument between the two.

“Hi Will, I am so excited you’re hosting,” said Wiig, to which Forte responded, “Not a good time,” encouraging her in a not-so-subtle way to leave.

He then decided to take a question from the audience, with SNL creator and producer Lorne Michaels appearing alongside actor Willem Dafoe.

“I’m so sorry, Will,” said Michaels, joking “There’s been a mistake.”

“Oh my God, this is not happening,” said Forte. “Wait, you texted me to come host, Lorne.”

“I texted Willem,” said Michaels, “and you know, autocorrect.”