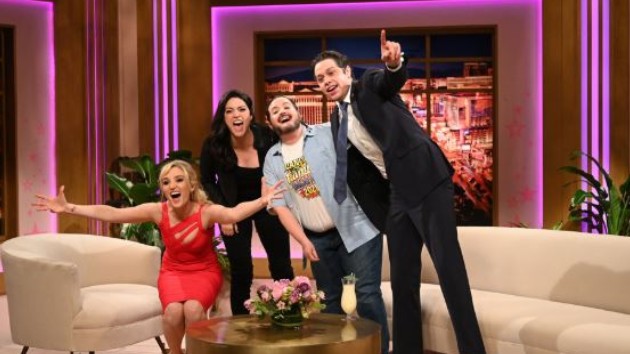 Cruz, Cuomo and Carano — played respectively by Aidy Bryant, Pete Davidson and Cecily Strong — guested on a talk show hosted by Chloe Fineman as Spears, that latter of whom has been embroiled in a legal battle with her father over conservatorship of her estate.

First up was Cruz, who drew criticism this week after it was revealed that he flew from Texas to Cancun for a family vacation, while bitter cold weather left millions of people in the state without power.

“Absolutely. I deeply regret my actions over the last couple of days, most flying United,” Cruz said.  “I’m sorry, I am pretty bad at human stuff.”

Fineman’s Spears then called out Cruz for blaming his actions on his daughters, warning, “As someone who has often blamed for other people’s problems at a young age…it could really mess up with their heads.”

Next, it was Cuomo’s turn to explain why he falsified data regarding the number of COVID-19 deaths in NYC nursing homes.

Davidson eventually said he was sorry, but balked at being lumped in with Cruz.

“I am a man, you are a clown,” he snapped.  “If you mess with me I will send you to a clown hospital and, when you die, I will not count your body.”

However, Strong’s Carano, who — according to SNL — was dropped from Disney+’s The Mandalorian for suggesting on Instagram that conservatives have it as bad as Jewish people living in Nazi Germany, refused to apologize.

“I never would have made that Nazi comparison if I had known everyone was going to be a Nazi about it,” Strong-as-Carano quipped.