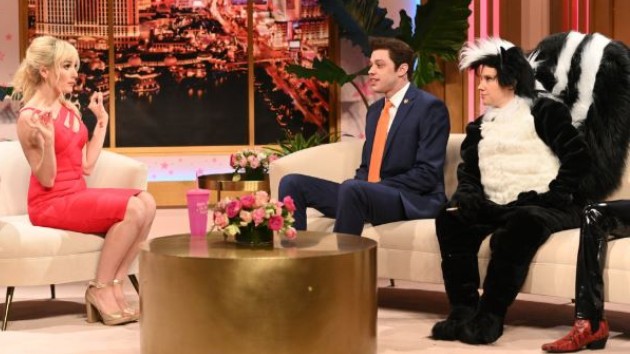 Fineman’s Spears was judge and jury as three embattled characters pleaded their case before her, where she would declare them either “innocent” or “not that innocent.”

Up first was Chris Redd as Lil Nas X, who has found himself embroiled in controversy over his “Satan Shoes” and for giving the dark lord a lap dance in his new music video.

Quipped Redd’s Lil Nas X when asked to react to the backlash, “I would say, ‘You know that wasn’t the real Satan, right? It was a dude in a Halloween devil costume.”

He then was tasked to give god a lap dance to balance everything out before being deemed “innocent.”

Up next was Kate McKinnon as disgraced toon Pepé Le Pew, who was axed from the new Space Jam movie for making repeated unwanted advances on Penelope Pussycat.

McKinnon, dressed in a skunk costume, apologizes for acting like a predator and vows to do better, telling Spears that he is currently reading Women are from Mars, Skunks are from France.

Last up was Pete Davidson parodying disgraced Florida Congressman Matt Gaetz, who is being investigated for alleged sex trafficking over a reported relationship with a 17-year-old girl.

McKinnon shoots back, “No. I’m a cartoon skunk, you are a United States Congressman. Be better, ok?”

Fineman’s Spears says she is unable to pass judgement on Gaetz and invites her audience to “judge him by his face.”