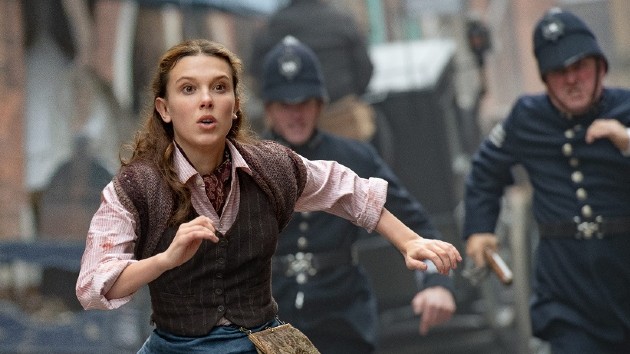 Netflix has debuted the trailer for the upcoming release of the sequel Enola Holmes 2.

Millie Bobby Brown and Henry Cavill return as Enola and her brother Sherlock, and the preview, set to Jet‘s “Are You Gonna Be My Girl,” teases their upcoming adventure.

The streaming service states, “Now a detective-for-hire like her infamous brother, Enola Holmes takes on her first official case to find a missing girl, as the sparks of a dangerous conspiracy ignite a mystery that requires the help of friends — and Sherlock himself — to unravel.”

In between foot chases, and dodging blades and bullets, Enola gets some advice from her mother, Eudoria, played by Helena Bonham Carter. “Find your allies, work with them and you will find yourself becoming more of who you are,” she says. “You could be magnificent.”

She apparently takes the advice and at one point dispatches a group of men with her friend, Susan Wokoma‘s Edith, at her side.

“She likes causing trouble, doesn’t she?” Edith understates at another point.