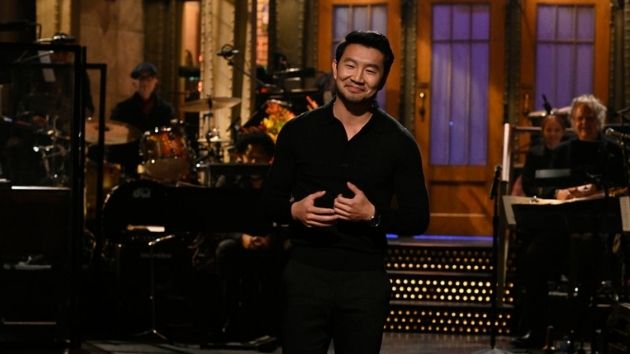 First-time Saturday Night Live host Shang-Chi and the Legend of the Ten Rings’ Simi Liu used his monologue to tout being “the show’s “first Chinese host on ‘SNL’…to be the fourth Chinese host,” and get a sweet revenge on a precocious young Marvel fan.

“I actually had a job dressing up as Spider-Man for kids’ birthday parties,” Liu recalled. “I’ll never forget this one birthday boy. His name was Trevor, and…let’s just say he was a real Trevor — kicking my shins and screaming, ‘You’re not Spider-Man!"”

“It will break your spirit, he continued. “But it also lit a fire under me. And I don’t know where he is now, but Trevor, if you’re watching, I just want to say you were right. I’m not Spider-Man. I’m Shang-Chi, b****.”

Liu and SNL’s Bowen Yang touted their various achievements such as “the first gay Asian cast member to mispronounce ‘boutique’” and “the first Asian man to deadpan on Splash Mountain.”

Elsewhere, Liu and cast member Ego Nwodim played contestants on “Republican or Not,” a game show hosted by Kenan Thompson that challenged them to to correctly guess the political leanings of various individuals based on deceptively simple statements.

A parody of Target holiday adds featuring depictions of Thanksgiving dinner guests, from “your niece’s annoying new boyfriend” to “the uncle who takes the [backyard football] game too seriously.”