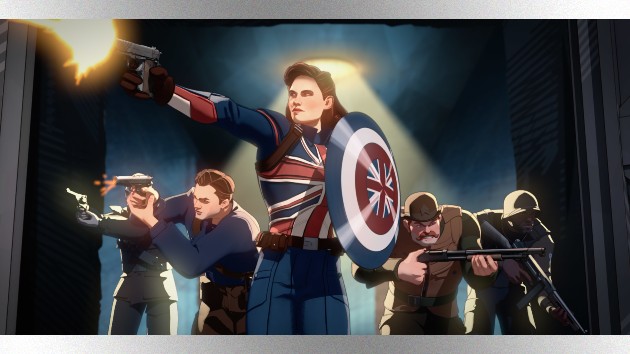 Marvel Studios has just released the trailer to its animated What If…? series for Disney+, which features the last performance of the late Black Panther star Chadwick Boseman as King T’Challa.

For Marvel Comics fans, issues of What If…? broke with the usual narratives and saw characters swap storylines and powers — and that’s what the series will do.

Acclaimed actor Jeffrey Wright voices the all-seeing The Watcher, whose divinity over time explores each story.

At least according to the snippet, it seems Howard dons the “cave suit” that his son wore on the big screen in 2008’s Iron Man — Captain Carter is shown riding the iron giant’s shoulder as it flies through the air.

Back in 2019, ABC Audio broke the story that Cooper was working on What If…, and he explained, “[I]t was very exciting to play. And it’s very comical how those relationships which you’ve already established change if those ‘what ifs’ happened. And that’s what’s really exciting about that.”

The series debuts on Disney+ on August 11.